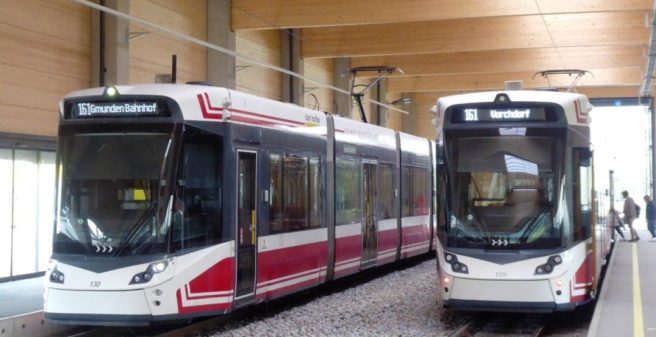 The public transport company Stern & Hafferl (St&H) has been operating electric local lines and in the past also tram lines in the Austrian region of Oberösterreich (Upper Austria) for more than 100 years. All remaining lines have been modernised and extended during the last 15-20 years. St&H is currently implementing several infrastructure expansion projects.

Stern & Hafferl has succeeded in building new crossing options via passing loops at stations on single-track sections on three of its regional train lines within a very short period of time thanks to the considerable efforts of all involved parties. The 9th medium-term investment programme for the Austrian private railways 2021 – 2025 (9. Mittelfristige Investitionsprogramm für die Österreichischen Privatbahnen 2021 – 2025) enables the implementation of infrastructure measures that should lead to sustainable improvements in services:

Lokalbahn Lambach – Vorchdorf-Eggenberg (LVE): Construction of a new passing loop at Waldl, thus enabling an hourly frequency with good connections in Lambach to ÖBB’s “Westbahn” mainline and in Vorchdorf to the Traunsee Tram (Lokalbahn Gmunden – Vorchdorf GV). The hourly frequency is to be introduced gradually starting in December 2021.

Linzer Lokalbahn (LILO): Construction of a new crossing station Bergham to rplace the old Leonding Lokalbahn station, which will be demolished in favor of an extension of the ÖBB line Linz – Wels.

Continental Europe’s oldest active railway station, Gmunden Engelhof, is being completely rebuilt as part of the infrastructure investments in the context of the introduction of the “Traunsee Tram” service on the Lokalbahn Gmunden-Vorchdorf.

Built in 1834, the station initially served as an important operational hub for the Budweis – Linz – Gmunden horse-drawn railway from 1836 onwards. The stables, which were unfortunately demolished decades ago, served as accommodation for the horses for the Gmunden – Engelhof line – on this section of the line, 50 metres of altitude were covered over a distance of 2.5 km. In 1855, the horse-drawn tramway was converted to steam traction – initially retaining the narrow gauge of 1106mm. In 1888, the narrow-gauge railway was nationalised on the remaining section between Lambach and Gmunden, while at the same time rolling stock was introduced to transport standard-gauge goods wagons. In 1903, the line was gauged to standard gauge. Since 1912, the metre-gauge local railway Gmunden – Vorchdorf has also used this time-honoured station. In 1988, the ÖBB discontinued passenger services between Lambach and Gmunden Seebahnhof. This also meant that the station was no longer staffed by ÖBB personnel and the building, which was in a poor condition anyway, visibly deteriorated.  In 2009, the standard gauge line Gmunden Engelhof – Gmunden Seebahnhof was formally closed and in 2015, freight traffic coming from Lambach also ended and the standard gauge tracks were dismantled.

Since the metre-gauge regio line Gmunden – Vorchdorf (“Traunsee Tram”) was extended through the Gmunden town area and linked with the traditional Gmunden tram, life has returned to Engelhof. The historic station building was acquired by ‘Schiene Oberösterreich GmbH’ and is to be revitalised. Stern & Hafferl’s offices, as the operator of the Traunsee Tram, will be based there in the future.

In the already mentioned 9th medium-term investment programme for the Austrian private railways, the construction of a multifunctional station hall (weather protection and attractive ambience for the passengers, protected parking for the vehicles) was planned, which has now been realised by Stern & Hafferl in the shortest possible time and in an attractive form. In addition to the three-track, 80-metre-long hall over a stub and two through tracks, a P&R area and bicycle parking facilities will also be built. It is to be hoped that the restoration of the over 185-year-old station building will not take too much longer.

With all these construction measures, the private company Stern & Hafferl has once again proven that it has the highest competence in the construction and operation of local and regional railways.