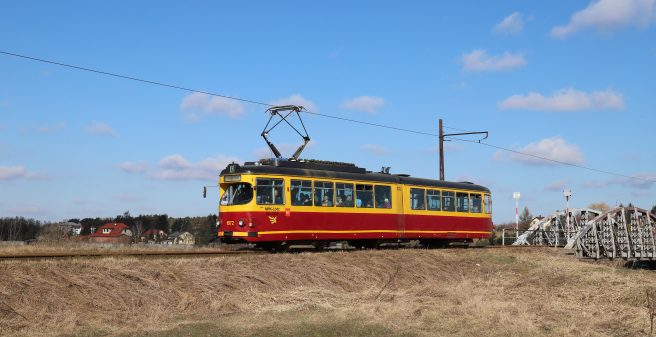 After 90 years of operation, the 17 km tram line that connected the third largest Polish city with the suburbs of Konstantynów and Lutomiersk stopped operating – maybe even forever. The tram network of Lodz has so far been the longest meter gauge network in the world with a total length of 124 km.

Tram line 43, inaugurated in 1929, was one of several suburban lines of the Łódź, or Lodz, tram. In addition to the cities’ vast tram network, there used to be a total of six land lines. However, lines 42 and 44 were already liquidated during communist times. Lines 41 (Lodz – Pabianice), 43 (Lodz – Konstantynów), 45 (Lodz – Zgierz) and 46 (Lodz – Zgierz – Ozorków) survived the fall of the iron curtain. In order to facilitate the financing and operation of the remaining lines, two seperate operating companies were founded in 1994: MKT (Międzygminna Komunikacja Tramwajowa) and the TP (Tramwaje Podmiejskie).

For decades, the suburban tram lines were operated successfully despite the limited financial situation of the served municipalities and at the two transport companies. TP had taken over some former Bielefeld GT6 trams from the municipal transport company MPK Lodz. Those were operated alongside the six-axle Konstal 803N trams, dating from 1973/74. The MKT operated a fleet which uniquely consisted in Kostal 803N trams which were partly modernized between 1999 and 2000. In 2007 MKT also purchased second hand trams from Germany and Austria, including GT6 trams from Innsbruck (Lohner, ex Bielefeld) and Ludwigshafen as well as GT8 trams from Mannheim / RNV, Freiburg and Innsbruck (ex Bielefeld and ex Hagen with an ex Bielefeld center section).

On 1 April 2012, the MPK took over the operation of the four remaining suburban trams. Consequently, MKT and TP were liquidated. While in recent years the tram infrastructure in the city center has been widely modernised with the help of EU funds, the tracks of the suburban routes were rather neglected. Logically, this resulted in a reduction of operational speed. Only one section of line 43 in Konstantynow has been modernised a few years ago.

On 3 February 2018, lines 45 and 46 stopped operating – since then the 22 km track is disused. The reason for this was the poor condition of the infrastructure. Since there is a bus replacement service, called Z45 and Z46. Although Zgierz and Ozorków were still interested in the rehabilitation of their tram lines, funding was missing. However, there are plans to modernize the 3.1 km section from Lodz Helenówek to Zgierz and put it back into operation in the near future.

A year later, unfortunately, it was decided to shut down line 43 for the same reasons – track condition and lack of funds. Although both municipalities, Konstantynów and Lutomiersk, still have a great interest in continuing the tram operation. However, both can not fund the necessary investment. Despite the poor track condition and relatively long travel times compared to car traffic, ridership on line 43 was always relatively high. Lutomiersk has ca. 8,000 inhabitants, in Konstantynow there are about half as many. Konstantynów is trying to reinstate tram operation as soon as possible. It remains to be seen if the necessary funds can be put together with the city of Lodz and possible EU financing. Until then, new bus lines are connecting Konstantynów and Lutomiersk to the tram network. From the city-side tram terminus Zdrowie the bus is running via Kazimierz to Konstantynow – in 17 minutes instead of previously 30 minutes by tram. It takes 43 minutes to get to Lutomiersk.

The old tram depot in Brus, which was used as a tram and bus museum since 2012, has lost track access due to the setting. Whether and when the collection will be connected to the tram network again, is not known. Brus is located only 2.1 km outside the city limits in Zdrowie and it can be assumed that a solution can be found here in the medium term.

After the shut-down of line 43 the only remaining the suburban tram is line 41 to Pabianice in the southwest of the city. With more than 66,000 inhabitants in Pabianice, the passenger volume is also significantly larger. The whole route will be modernized later this year, meaning that its’ preservation is assured for the long-term.

The Łódź tram fan club (Klub Miłośników Starych Tramwajów) and the VDVA (Association of German Transport Amateurs) organised several charter trips on line 43 and on other Łódź tram lines as part of a “farewell” event with various types of historical rolling stock. For the last commercial tram service during the night of March 2nd, an 8-axle GT8N had to be used exceptionally due to the high number of passengers wanting to take the “last tram”. There was a quite melancholic farewell mood. Passengers, tram enthusiasts and local residents took the opportunity to drive one more time with their beloved “Tramwaj”.