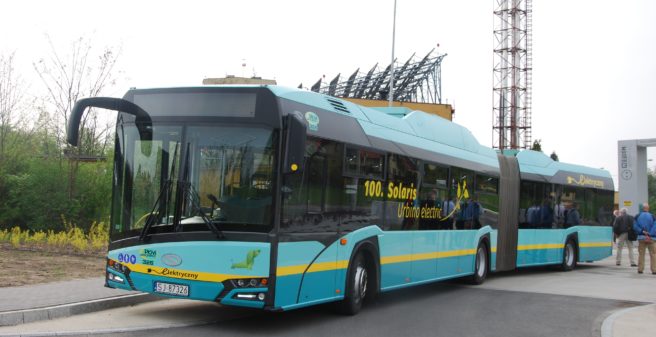 For the first time, Bonn’s public transport operator SWB (Stadtwerke Bonn Verkehrs GmbH) has ordered buses from Solaris, a subsidiary of the Spanish CAF Group, based in Bolechowo, Poland (near Poznan). Following the call for tenders, the decision was taken in favour of three “Solaris Urbino 18 electric” electric articulated buses.

However, Solaris buses are not fully unknown in the region: the neighboring bus operator RSVG from Troisdorf has had a large number of Solaris buses in use for years, and these also operate to Bonn Central Station.

First electric bus test at SWB as early as 2013

In fact, electric buses have been known in Bonn for several years already. In 2013, SWB tested a Chinese demonstration car, which also did “what it should”: for four weeks, it drove 200 kilometers on the route (line 630) every day. This line was deliberately chosen for the test, because it not only offers dense city traffic, regional sections and it is also uphill and downhill, and partly quite steep (the so-called “cat hole” between the districts Of Ippendorf and Röttgen). Here the electric bus was able to show how it coped with the inclinations and its energy recuperation function on the slope.

One thing, however, the SWB did not like with the Chinese test car: at that time the batteries were still so heavy that the car was only allowed to carry 60 passengers despite the 12 meters in length. In terms of passenger capacity, therefore, it was more of a midibus …

In the call for tenders, SWB required the electric buses to have a daily range of at least 200 kilometres, depending on the weather and road conditions. This mileage had to be guaranteed for at least 12 years.

The batteries are charged exclusively overnight at the depot (“depot charger”), a recharging on the line is not planned in Bonn – unlike in the neighbouring city of Cologne.

Bonn’s new Solaris e-buses will be equipped with the latest generation of “Solaris High Energy+” batteries. Seven packs with a nominal capacity of 553 kWh will be installed in the buses. The electric articulated buses will be powered by a special “electric drive axle” in which two electric motors with an output of 125 kW each are installed. Heating and air conditioning are purely electric. This is ensured by a heat pump which operates taking into account on the outside temperature. Here, too, the progress of e-mobility and technology is visible. The era of oil heaters over!

The buses are equipped with the “MobilEye Shield+” assistance system for greater safety. Thanks to appropriately mounted cameras, the driver can also see the blind spot of the exterior mirrors – and thus, for example, also see pedestrians and cyclists next to the bus when turning. One of the three buses is also equipped with cameras instead of rear-view mirrors. This significantly improves the driver’s view to the rear.

Solaris has developed a completely new seating arrangement for SWB. It allows the bus to be equipped with 44 seats. For instance, 12 seats have been arranged in the low-floor area and not on seat boxes in order to improve the accessibility. Solaris also ensures that there is sufficient space for strollers, wheelchairs or trolleys. There will be 21 double USB charging ports available to passengers, and another will be in the driver’s seat.

Solaris will supply the new Bonn electric articulated buses in the course of 2020. The manufacturer emphasizes that the market for electric buses is developing very dynamically. In Germany alone, Solaris has been able to deliver 60 electric buses so far, and in 2019 German transport companies have commissioned a proud 120 more cars in Bolechowo.

Ebusco said that it could do 450 kilometers before it had to recharge.

Have a nice evening,