Sweden’s first electric BRT service up and running in Stockholm 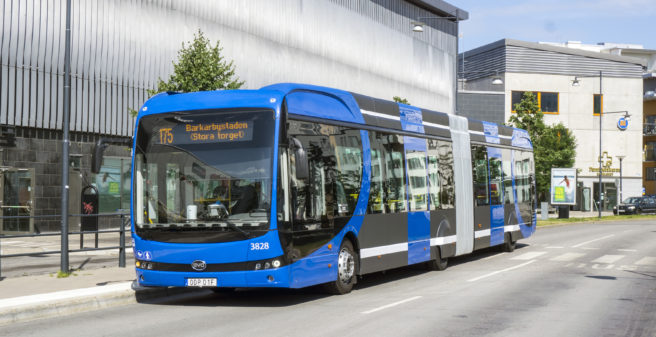 The 17th of August 2020 was the inauguration date of Sweden’s first electric bus rapid transit (BRT) service in the country’s capital: The buses have priority at junctions and roundabouts and for the most part use their own right-of-way.

The buses operate between Barkarbystaden in Järfälla, northwest of Stockholm, and the metro station Akalla. At a later stage, the line will be extended to Barkarby, where an interchange to local train services will be offered. Nobina is the operator of the line. Travel time could be greatly reduced from twelve minutes to six minutes thanks to the introduction of the new service.

The four articulated electric buses for the BRT line were built by BYD at its plant in the Chinese city of Hangzhou. The factory only builds buses for the export market. The 18-metre-long articulated buses have four wide electric doors which ensure fast entry and exit at the stops. Total passenger capacity is 90, thereof 36 seated and 53 standing. Between the second and and the fourth door the seats are arranged in longitudinal form on the right-hand side.

The buses are being recharged at Nobina’s bus depot in Järfälla. They have a motor power of nominal 250 kW. The batteries have a capacity of 522 kW, which allows driving distances of up to 290 km with one full battery load under favourable conditions. However, the buses will only circulate approximately 190 km before being recharged at the depot. As each bus has to travel approximately 300 km per day, an exchange is necessary during the day shift.

The investment in public transport in Barkarbystaden was carried out in close cooperation between Järfälla Municipality, the Stockholm Region and the Nobina bus company. The investments also include the autonomous minibuses of Easy Mile, which are in public service since autumn 2018 as well as a 12-metre Scania autonomous bus which is currently undergoing testing.