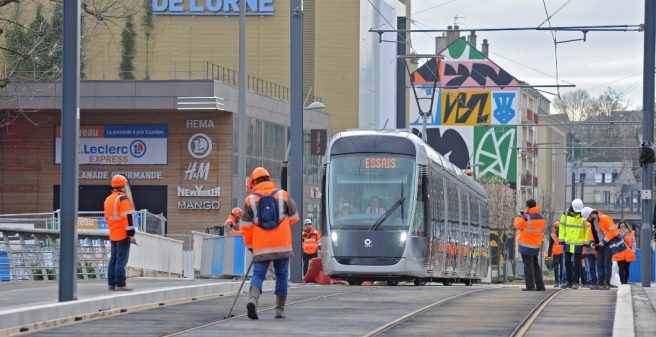 The end of the construction work of Caen’s new tram is in sight and very soon the city will have its’ tramway back. The new steel-wheel tram in Caen will be inaugurated on July 27th after a record construction time of only 18 months.

Caen already used to have a so-called “tramway on rubber-tyres” (Tramways sur Pneus) since the year 2002, also known as TVR (French for Transport sur Voie Réservé, englisch GLT, Guided Light Transport). It consisted in rubber-tyred three-car trainsets which were guided with a central guide rail. The system had been developed in the 1980s by the Belgian railway manufacturer La Brugeoise et Nivelles (BN) which was later taken over by Bombardier Transportation. The aim of the concept was to offer a low-cost tramway version, reducing investment cost by ca. 40 % in comparison to conventional steel-wheel trams. After a demonstrator operation from 1987 – 1990 two cities in France applied the TVR/ GLT concept:

The Communauté Urbaine Caen, how the administrative body of Caen is called, decided to replace the TVR/ GLT system in 2014 for technical and operational reasons. The rubber-tyred tram was put out of service on 31 December 2017 and replaced temporarily by buses. Conversion of the existing track bed for steel-wheel operation started immediately – this fact also explains the extremely short construction time of 18 months. Until April 2019 90 % of the construction work was already completed and testing started on most parts of the line.

The so-called „test operation without passenger” will start in the beginning of July so that drivers and the operational personnel will be ready for commercial service which starts on July 27th. Following the D-Day on which the Allies landed in Normandy, Caen calls its tramway inauguration the “T-Day” – T for tramway.

The new steel-wheel tramway follows the route of the TVR/ GLT system from north to south with 2 separate terminus in the north and south respectively. At the southern terminus a new 1 km extension from Grâce de Dieu to the depot has been added as the GLT’s were brought to the depot in diesel operation via public streets. Next to the depot a new terminus called Collège Hawking has been installed. In the city centre a new branch to the SNCF station Rives de l’Orne has been added to the network. This will be the terminus of the new line T3. In total, the network will have a length of 16.2 km.

In November 2016 26 five-car Citadis X05 low-floor trams had been ordered for a total volume of 52 Mio. € with Alstom. The first vehicles arrived in Caen at the end of 2018. As usual for Citadis, especially in French cities, the trams are characterised by a personalised exterior and interior design, including a customer-specific frontend. The Citadis for Caen are painted in grey with black window stripes.

Each of the three lines will be operated in 10 minute intervals, leading to 3 minute headways in the city centre. The operator of the tram Keolis, expects the passenger number to be as high as 64,000 per day – in comparison to today’s 42,000 passengers. The total project has a volume of 260 mio. € (without taxes).

Further information and a map are to be found at: