Taganrog/Russia: First new trams under the concession contract in service 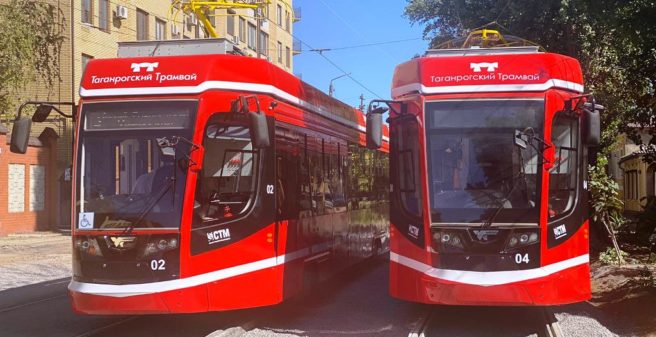 In May 2021, the Russian city of Taganrog had signed a concession contract for the comprehensive modernisation of its tramway network with the Sinara-Gorodskie Transportnye Resheniya Taganrog consortium. This included not only the renovation and renewal of the approximately 45 km long track network (25 route kilometres), the depot facilities, the power supply and control infrastructure, but also the delivery of a total of 60 single-section, four-axle low-floor tramcars from the manufacturer UKVZ Ust-Katavskiy (Roscosmos Group).

The first of the new tramcars have now been officially presented to the citizens of Taganrog. Ten of them are to be delivered before the end of 2021 and will mainly be used on line 3 – reopened after extensive construction work between Krasny Kotelshchik and Dobrolyubovsky Pereulok. Delivery of the new trams had already begun in July, and seven of the vehicles are currently in the city. All 60 ordered railcars will arrive by autumn 2022 and will replace most of the existing fleet. The fleet is currently largely made up of used cars from the capital Moscow. The new trams of UKVZ’s 71-628 model feature, among others, modern interior design, up-to-date passenger information, digital ticket control, CCTV and facilities for the disabled.

Before the modernisation started, the city’s tram network consisted of a total of nine lines with multiple overlaps, plus six trolleybus lines. Tramways operate in Taganrog since 1932, trolleybus since 1977.

A network scheme can be found here: http://www.urbanrail.net/eu/ru/taganrog/taganrog.htm