The annual tramway parade in Porto 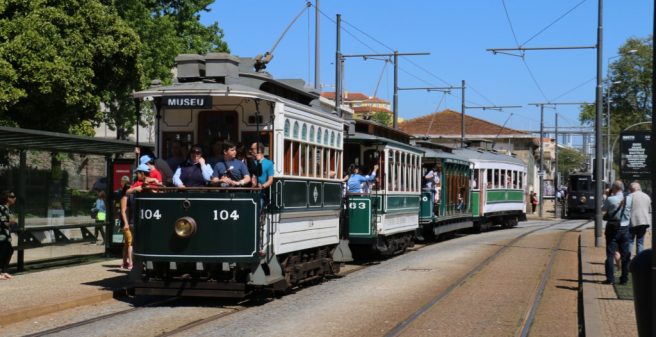 Alongside the modern light rail system, Porto is also known for its’ iconic historic tramway. Its’ cars date from the first half of the 19th century and are operated on three city tram lines through the historical city centre. Porto is the second largest city in Portugal and both tourists and tram spotters flock to Porto every year, especially in the summer time. The oldtimer trams circulate every 30 minutes. Sometimes there are even long queues for the tram – demand is very high, especially on the weekends.

The oldtimer trams are located in the Massarelos depot at the Douro riverside. This location is the starting point of electric tram operation on the Iberic peninsula. Since 28 years already the local transport operator STCP is organising a very special event once per year: the so-called “Desfile de Carros Electricos” – it is a parade with all available trams in running condition circulating alongside the Douro river. Even trams which are not operating on a daily basis, are shown during the parade – which makes this event even more special for tourists and enthusiasts. The oldtimer collection of Porto is a particular one. Most of the historic trams are Brill-type trams imported from the USA. The former tram and bus production company J. G. Brill & Son in Philadelphia used to produce trams not only for the USA, but also North and South America as well as Portugal.

This year, the parade took place on Saturday 4 May with a large program around the historic trams. The German Tram and Transport Interest Group VDVA (Verband Deutscher Verkehrs-Amateure, www.vdva.de) organised a short trip to Portugal, allowing also for some extraordinary motives in Porto which UTM is providing as an exclusive report.