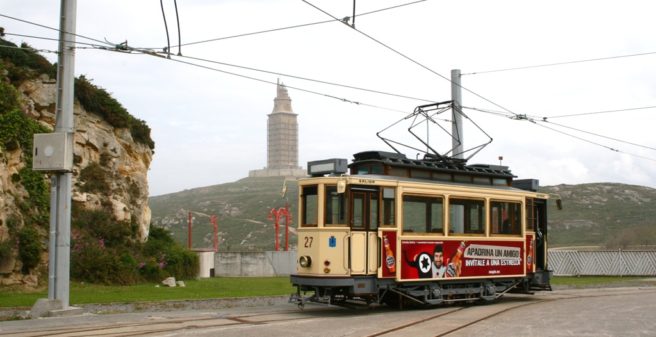 Replica tram no. 27 at the depot - the roman based Torre de Herculés in the background | © D. Budach

The tourist tramway in La Coruña in northwestern Spain will not be reopened again. The city council decided accordingly on 16 December 2020 and the dismantling of the remaining infrastructure as well as the sale of the vehicles is foreseen to be happening in the near future.

The metre-gauge tramway had been opened in sections between 1997 and 2003 and circled around the old town center of La Coruña (also referred to as A Coruña in the local language gallego) located on a peninsula. A derailment on 2 July 2011 forced the tramway to close, initially on a provisional basis, however, all efforts to resume traffic turned out to be in vain. Even before 2011, the full touristic potential of the tramway had hardly been exploited, a limited timetable coupled with a serious lack of marketing left much to be desired – quite often it was even difficult to clearly figure out the operation days and the scheduled timetable.

A large part of the approximately 6 km long route ran directly along the waterfront promenade and the city beaches Playa de Orzán y Playa Riazor. Right from the beginning, the tram was designed as the starting point for a future, modern low-floor tram system – the final route of the former tramway system had ceased operation in 1964. However, various efforts to proceed with this project failed again and again over the past 20 years, partly due to a lack of funding, but predominantely because of a serious lack of political support. Elsewhere in the country, for example, the use of special EU funds (“Corona Fund”) for infrastructure projects ranks high on the agenda of regional decision-makers, but not so in the Gallician region, where the application for parts of these funds for tramway projects was not even considered. The reconstruction of the existing line as a first-class tourist attraction, eventually did also find not enough supporters.

The tracks and catenary had already been partly removed or paved over since 2011. All what is left will now be dismantled and the depot, newly built in 1996, will be used for other purposes. The historic tram cars will be sold as well. The tourist tram in Sóller on Mallorca has already indicated an interest in them. The following two-axle tramcars are currently stored at the depot: