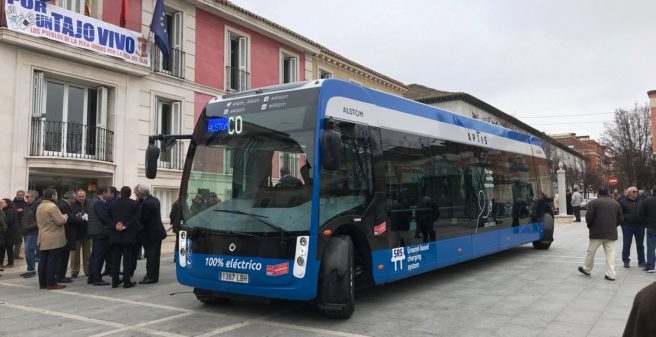 Presentation of the Aptis test vehicle in Aranjuez | © Alstom

The Spanish world heritage city of Aranjuez, some 40 km south of Madrid, will be the first town in the country to operate Alstom’s innovate electric bus model Aptis. The local operator AISA has signed a contract with the manufacturer to incorporate the ebus into its urban vehicles fleet. Aranjuez bus service is part of Madrid’s regional transport service consortium the Consorcio Regional de Transportes de la Comunidad de Madrid.

Contract signature follows a several-days-test in which the bus had demonstrated its adaptability, efficiency and integration in the urban environment and within the rest of the operator’s fleet. The new Aptis will be used on routes through the historic centre of the town before the end of the year.

“This is the first commercial success of Aptis in Spain, which we hope to be followed by others throughout this year. During the tests carried out in different Spanish cities, our innovative electric bus has generated great expectation both among operators and among users. This contract constitutes a major new step for Alstom, which aims to be the most innovative world actor for sustainable, smart mobility”, highlights Antonio Moreno, Alstom in Spain Managing Director.

Alstom has received orders for the Aptis model in French cities like Paris, Grenobe, Strasbourg and Toulon. In Spain the bus has been on test in Barcelona and Madrid, among others.