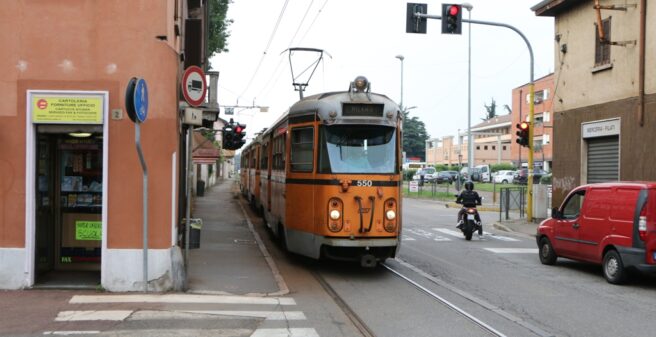 In the north of the Italian metropolis Milan, some of the once almost ubiquitous, classic interurban tram lines survived for a remarkably long time, elsewhere they had disappeared many years ago.

Since 30 September 2022, this has come to an end, at least for the time being: Milan’s public transport company ATM ceased the operation on the last line between Comasina metro station and Limbiate, after many years of neglegtion and lack of maintenance. In the last few months, trains only ran on the line in the morning during the rush hour between 6 and 9.30 a.m. Otherwise, ATM referred to the parallel bus replacement service.

In the age of worldwide renaissance of electric rail transport, this news can only come as a surprise – at least at first glance: The tramway, known as Line 179, ran through a densely populated area in the northern outskirts of Milan, and this mostly on its own track. On a closer look, however, it was and still is obvious that the line is lagging behind in modernisation despite these general favorable conditions. It is single-tracked throughout, there are numerous, largely unsecured crossings with side roads and some villages are passed through on the side of the road without any separation from motor traffic. This required skilled, slow driving in various locations.

Line 179 is the last of a once extensive network in the greater Milan area. All other lines were gradually converted to buses, and in some cases there was also a conversion and integration into the metro network. Since the beginning of the 1980s, the so-called “Brianza lines” have remained in the north, as a coherent subnetwork of 39 km length with the lines to Desio-Carate, Milanino and Varedo-Limbiate. For years there was a dispute about their integration into the ATM network. ATM abandoned the urban terminus Via Valtellina in Milan in 1999 and separated the network into two parts, while both lines were banned from the inner city area in 1999 and thus also separated operationally. The line to Carate, already shortened to Desio since 1982, was discontinued in 2011. It is to be rebuilt and integrated into the ATM tram network, but construction work is progressing slowly. For 12 years, the line to Limbiate had no connection at all to the rest of the rail network, and passengers had to change to buses in Affori to get to the centre, which caused passenger numbers to drop dramatically. In 2011, the intercity tram was shortened again, but to the new terminus Comasina of the by then extended metro line M3; since then, there is a direct connection to the rapid transit system to the city centre.

For many years, there have been plans to convert the Limbiate line into a modern, double-track suburban line and to integrate it into the city network, but so far it has always failed due to financing. It was not until 2020 that the public authorities involved agreed on a distribution of the expected costs of EUR 153 million, but in the meantime cost increases make renegotiations unavoidable, no realistic schedule for the start of construction can be given at present. After years (not to say decades) without any significant modernisation efforts, the investment backlog is now considerable. The line, which has also been severely neglected in terms of maintenance, had seen very little changes in terms of service and operating procedures for almost 50 years, except for the closure of the urban sections mentioned before. Of course, step-by-step modernisation measures could have been started long ago in order to speed up operations and make the line more efficient and attractive to the passengers. Most recently, the maintenance backlog led to various slow-speed sections of only 5 km/h imposed by the supervisory authority, for which ATM is estimating several million euros for short-term repairs.

The rolling stock, after 60 and more years of service, was also in urgent need for replacement: seven of the so-called “block trains” (“Treni bloccati”), built in the workshops of the ATM in the 1960s on the basis of older interurban cars from the 1940s and 1950s, were last in service. They each consist of a central motor car to which driving trailers are attached at both ends. The motor units themselves do not have driver’s cabs and the trains can therefore not operate independently. These three-car-trainsets ran with conductors on board until the very end.

The service had long been limited to Mondays-Saturdays until 8 pm, and for several years now only ran during rush hour between 6 and 9.30 am and 4 to 8 pm. Otherwise, buses replaced the trains.

In order to make the change easier to acept for the passengers, ATM has announced shorter intervals and thus more departures on the parallel substitute bus line 165. In fact, however, the bus by no means offers a comparable alternative, because due to the lack of its own right-of-way, it is simply often got stuck in traffic jams. The tramway, on the other hand, despite all the problems, was able to bypass the motor traffic and thus offered a much more reliable service, especially during rush hour.

Public protest against the cease of operations on 30 September was engaged in various places, but for the time being without any result – ATM stopped the tram service as planned.

There is certainly hope, as the modernisation plans are not yet off the table. In addition, ATM has already initiated the procurement of up to 30 modern low-floor trams from Stadler for the interurban lines to Desio and Limbiate (we reported here: https://www.urban-transport-magazine.com/en/milan-20-city-trams-and-10-interurban-tramways-ordered-framework-agreement-signed/ ). 10 of these have already been firmly ordered for delivery by 2024.

However, when and in what form the lines will be reopened and possibly even extended in a modern form can hardly be estimated today.

Looking back into the line’s history: