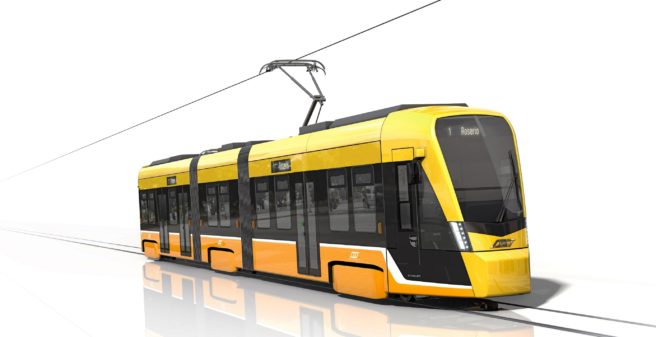 After being awarded in July 2019 Stadler Rail Group and Azienda Transporti Milanesi S.p.A. (ATM) have signed the framework agreement for the manufacture and delivery of up to 80 TRAMLINK trams. This is the first time Stadler delivers trams to Italy. The framework agreement has a term of six years and an order volume of 172.6 million euros. At the same time, ATM has made an initial order of 30 vehicles: 20 for the city network and 10 for interurban services.

The 80 bidirectional, 25 metres long TRAMLINK trams will be gradually replace older rolling stock and also allow to reinforce the service offer. The TRAMLINK consists of three duplex stainless steel car bodies, which are highly resistant to corrosion and reduce the weight while maintaining the strength of the structure. The three bogies improve the smooth running of the trams in the very tight radius curves typical of Milan. This reduces the noise significantly, with the consequent benefits for passengers and local residents.

The low-floor and three doors on each side allow a fast flow of passengers, which is confirmed by studies conducted by the Politecnico di Milano. he TRAMLINK is equipped with an anti-collision device that can intervene when it detects a potential collision situation with pedestrians, cars or other obstacles. Inside the vehicle, safety is guaranteed by cameras that eliminate blind spots.

The tram network in Milan currently has a route length of 117 km and is served by 17 city lines and one interurban route. The operational fleet includes approximately 420 vehicles, including more than hundred 90-year-old “Peter Witt” tramways. We had recently reported on the renewal programme of the various old tram series here: