The tram is to return to Kiel! 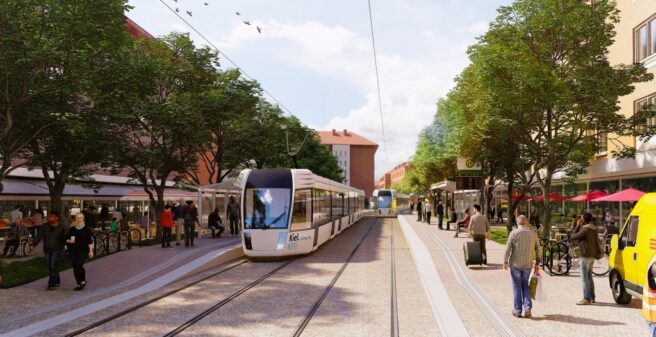 For years already, ideas and concepts to reintroduce the tram in Kiel, the capital of Schleswig-Holstein, have been underway. In 1985, the last Kiel tram ran on its 1100 mm track. The first demands for a modern light rail system arose as early as 1994. In 2003, efforts were made to copy the TramTrain model that had been so successful in other cities. Unfortunately, the StadtRegionalBahn Kiel finally failed in 2015 due to the lack of support from neighbouring districts. But now the time has finally come:

At the beginning of October 2022, experts recommended the tram in a route study, and on 26 October 2022 the council followed suit – almost unanimously. The tramway is to return to Kiel!

In Kiel’s city hall, four expert committees came together for a joint meeting: Building Committee, Economic Committee, Finance Committee and Interior and Environment Committee. The aim was to decide whether the city of Kiel should enter into the preliminary planning for a new public transport system. The experts once again answered the questions of the politicians, and in the end a vote was taken. The order for a tram was given by a broad coalition of SPD, Greens, SSW, CDU, FDP, KVM and Left Party! Dissenting votes came from the AfD in all committees, in one committee also from the FDP.

Matthias Edeler, deputy chairman of the association “Tram für Kiel e.V.”, is enthusiastic: “The overwhelming majority for the tram, which includes all parliamentary groups, is a strong signal that the tram had the clearly better arguments on its side.”

The decision has finally to be approved by the council on 17 November 2022. Against the background of this majority, however, this should be a mere formality. Likewise, the proposal for the core network and the target agreement with the association “Die Holtenauer e.V.” found clear majorities.

The route study began in 2020 with the intention to clarify two questions: what should the network look like and which high-quality local transport system should be used in the future, compared to today‘s bus-only system? A modern low-floor tram or a bus largely using own alignment – internationally well-known under the name Bus Rapid Transit (BRT).

The result was presented at the beginning of October 2022 – it included a clear recommendation in favor of the tram. The study made it very clear that the tram scores significantly better than a BRT system in all decisive criteria. Particular emphasis was placed on the low operating costs, which are 6 million euros lower per year for the tram than for the BRT. In addition, according to the experts, the tram is more passenger-friendly, has better accessibility, is more stable and reliable, uses less space and seals less land – among other aspects.

Most importantly, however, a BRT would already be at its capacity limit when it opened, and in some cases already overloaded. A later expansion – which all parties would like to see – would no longer be possible. The congestion of the BRT would also affect the rest of the traffic and reduce the capacity of the road network. Things need to be set in motion now for the tram: It now needs the personnel for the planning and a company to coordinate the steps on the way to the tram. The course has also been set for this.

It is proposed to gradually build a standard gauge, 36 km long tram network with 4 lines. Specifically, this includes the following lines:

According to current planning, 46 bi-directional low-floor trams, 45 m and 52 m long, will be required for operation in the final phase.

The first line is scheduled to open in 2034. The core network is to be built in three stages until 2039. Further extensions, especially to the north and south of the city, are already planned. In order to avoid EMC problems in the area of the university, planning includings partially catenary-free operation.

If all of Kiel’s plans materialize, after more than three decades without any new system in Germnay the tram system will finally be reintroduced in a major city. For the people of Kiel, the time without trams will then come to an end after almost 50 years, the reintroduction of a modern tram will then certainly be followed with great interest by other German cities of comparable size. Lübeck could be the next city to follow. Here the feasibility study for the introduction of the tram is just beginning, as in Kiel supervised by the company Rambøll and accompanied by our sister association „Tram für Lübeck“.

A detailed project summary for Kiel can be found here:
https://www.kiel.de/de/umwelt_verkehr/_dokumente_kiel_bewegt_sich/kiel_oepnv_system_trassenstudie_broschuere.pdf

Why no line to the SW?