Three projects to improve public transport in Cairo and Alexandria 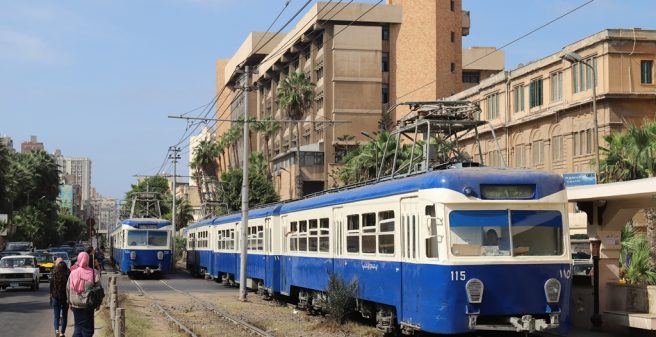 Egypt is increasing its focus on rail-based, environmentally friendly and sustainable projects to improve mobility in the cities of Cairo and Alexandria. The European Investment Bank (EIB) is supporting this objective with a EUR 1.128 billion loan for the improvement and extension of metro and tram systems in Alexandria and Cairo. The aim is to improve the availability and quality of public transport in the two cities, where around a third of the country’s population live and work. Three projects are in the foreground.

The 22 km railway between Misr station in Alexandria and the north-eastern coastal town of Abu Qir will be electrified and converted into an 80 km/h metro with 18 stations and a depot with workshop. Level crossings will be eliminated. Tenders are said to be underway. The entire project is expected to cost EUR 750 million.

According to Egyptian Transport Minister Kamel Al-Wazir, this project is expected to generate a positive financial and environmental impact. It is expected to bring annual health savings in Alexandria of 2.4 billion Egyptian pounds (approx. 124 million EUR) by improving air quality, as well as a reduction of 600,000 tonnes of CO2 emissions.

There is also a plan to build a new 120 km/h metro line from Abu Qir to Burg al-Arab in the west in a second and third phase at a cost of US$2.5bn (approx. EUR2.1bn). 6 km are to be elevated, the rest at ground level. The entire metro network should then comprise 43 km.

The standard gauge, 32 km long tramway network of Alexandria (5.2 million inhabitants), which started operating in 1860, is the oldest in Africa and the Middle East. It consists of two sets of lines: the 13.8 km Raml network and the Al Madina network, which were last renovated in the 1960s. The loan will help to triple the capacity of the Raml network, which consists of four partially parallel lines, and halve the travel time between the two terminals Raml and El Nasr/Victoria, while improving passenger comfort. According to information, the modernisation project will require a total investment of EUR 360 million and will be completed in three years.

Somewhat contradictory information speaks of financing through a EUR100m loan from the French Development Agency (AFD) granted in 2017, EUR180m from the European Investment Bank (EIB) approved in July 2020, and EUR80m self-financing from the Egyptian Ministry of Investment and International Cooperation.

Egypt has awarded the project to a consortium led by the French company Systra, with partners Egis, ACE and Projacs (an Egis subsidiary). This consortium will undertake the preliminary studies, the preparation and evaluation of the tender documents and the supervision of the works until the end of the guarantee period. The works, which are scheduled to last 34 months, include the construction of pedestrian bridges, the installation of electronic traffic signals and the complete replacement of the vehicles supplied by Kinki Sharyo in the 1980s and 90s.

We reported about the modernisation of the Alexandria tram system here:

Cairo Metro Line 2, 23 km long and now 23 years old, is now due for rehabilitation and modernisation of its electrical and mechanical systems. EUR 240 million have been earmarked for this. This project is part of the Ministry of Transport’s comprehensive modernisation plan for the first two metro lines. It includes the modernisation of the signalling system, the communication systems and the central control systems, but also the renewal of the tracks and the electromechanical equipment as well as the procurement of new air-conditioned trains so that all metro trains will be equipped with air-conditioning in the future.

The Egyptian Ministry of Transport has already ordered new rolling stock for Cairo from Hyundai Rotem in August 2019 for six trains that will run on Metro Line 2.

The order followed a £150.8bn (approximately €7.96bn) contract to supply 48 metro trains for Line 2, awarded to Hyundai Rotem in June 2019. In 2017, Egypt’s National Authority for Tunnels (NAT), a department of the Ministry of Transport, selected Hyundai Rotem to supply 256 metro cars for phase three of the Cairo Metro Line 3 extension.

The tram pictured in Alexandria infers that it was built in 1972, and was from Copenhagen? Copenhagen closed its tramways in 1972. I find it very hard to believe Copenhagen was taking delivery of new trams right as they were closing down the network. What makes more sense is that Alexandria acquired trams from Copenhagen in 1972; trams which at that point might’ve already been 10-20 years old.

You are right, this tram was old in 1972 and when they closed their network, it was taken over by Alexandria.