Two trams for the museum: End of service of the 11G and 12G series in Amsterdam 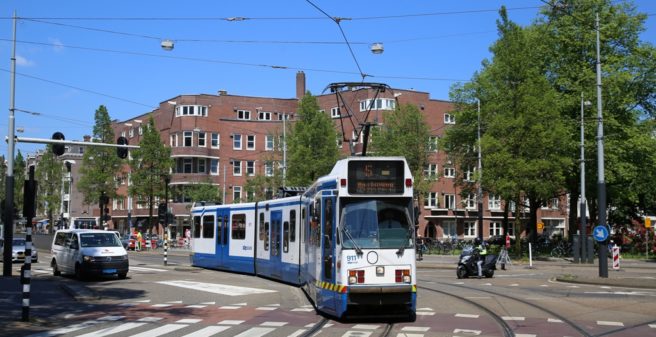 On June 14, 2021, two tramcars were handed over to the local museum association EMA – Elektrische Museumtramlijn Amsterdam – in Amsterdam: one bi-directional tram type 11G (919) and one single-ended tram type 12G (820). G stands for ‘gelede streetcar’, i.e. articulated tramway. Both date from 1989-1991, built by BN in Belgium, and belong to the first generation of low-floor tramways – with only a small low-floor section in the middle part. In addition, they are the only Amsterdam tramcars with pedal control, because their construction is derived from The Hague’s contemporanean tramcars of the GTL model (class 3000, also built by BN). The Hague traditionally used pedal control – also in the new Siemens Avenios currently on delivery – because they were used to the traditional PCC design.

The 25 sigle-ended trams (12G) nos. 817-841 mainly operated on lines 19 and 24 in recent years. 2 January 2021 was the last day of service for them, without any celebrations. Since then the trams have been stored in the depot Havenstraat, scrapping is the likely option.

The 20 bi-directional coaches (11G) nos. 901-920 were built on purpose for line 5 to Amstelveen, because of the fact that the terminus layout there is without any turning loop. Some of them are still operating. End of service was foreseen for 6 June 2021, but commissioning of the new CAF Urbos trams is a little slower than expected  Subsequently, until further notice there is still a mixed operation of CAF and 11G trams on line 5, and since 7 June 2021 mixed operation with 11G trams and Combinos on line 19, too.

The museum association would like to restore tram 820 later and return it to its original condition; the bi-directional tram will remain in its current condition.