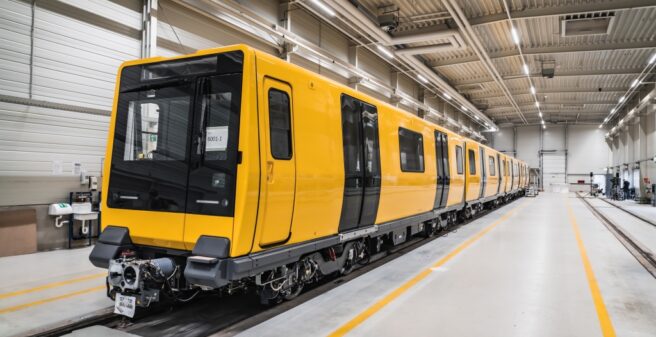 Stadler and Berlin’s public transport operator BVG unveiled the first new Generation JK metro for Berlin’s small profile at an on-site event today, 11 November 2022, and invited passengers to try out the seats. The first train is currently being commissioned at the Stadler site in Velten. The other test vehicles for small and large profiles will follow step by step in the coming months.

Vehicle 6001/6501 has already made its first journey from Berlin to Velten – although not yet under its own power. Since October, the first new metro for Berlin has been at Stadler’s commissioning site in the north of Berlin. There, like all trains, the vehicle is undergoing an intensive programme before it is expected to be delivered to BVG in spring 2023.

Before it operates on Berlin’s metro network, the train is comprehensively checked and tested. During static and dynamic commissioning, i.e. when stationary and in motion, detailed checks are carried out to ensure that everything functions exactly as it should. Whether it’s the wiring of the 42 kilometres of cable or one of the 16 software systems: everything is put through its paces. Even if, among other things, construction spaces inside the vehicle have to be made accessible again for this purpose, the train is fully assembled during commissioning, so that one gets an impression of the feeling of space in the new underground for the first time.

The J/JK series is the latest generation of the Berlin underground. Before production of the series vehicles begins, eight test vehicles consisting of several carriages (24 carriages in total) undergo an intensive test and trial programme in which BVG and Stadler work closely together in order to be able to incorporate any knowledge gained into series production. Twelve cars each for the small and the large profile form the test group. The test phase on the BVG tracks will start in spring 2023, a few weeks later than originally planned. Global supply chain disruptions have led to delays in the completion of the test vehicles. The series vehicles are not affected by this. They are to be delivered as planned from the beginning of 2024.