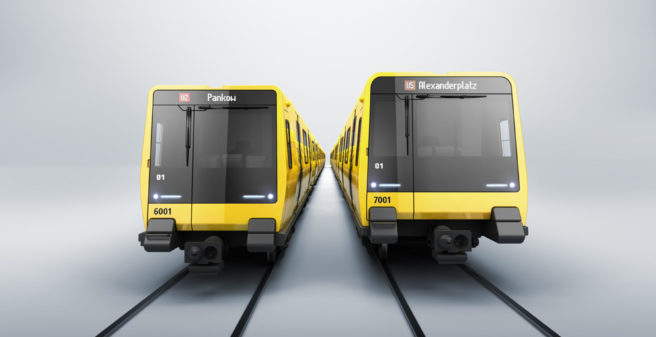 New metro cars for Berlin: the JK (to the left) and J series (to the right) I © Stadler

New metros for Berlin. The Berlin Court of Appeal decided on Friday, 20 March, in the last instance of appeal that the order over 1,500 metro cars from Stadler is legitimate. Alstom, one of the unsuccessful bidders, had initiated a review procedure over the 3 billion Euro deal last year. In May 2019, BVG selected the Swiss manufacturer Stadler as the winner to build 1,500 cars in its Pankow plant in order to renew Berlin’s ageing metro fleet.

Alstom, on the other hand, had lodged an appeal with the procurement chamber. UTM reported here: https://www.urban-transport-magazine.com/en/berlin-tender-for-1500-metro-cars-on-hold/

There were two hearings in November 2019 and a last hearing at the Court of Appeal in which Alstom’s complaint was now rejected. The law does not provide for an appeal against the decision of the awarding authority.

For Berlin’s operator BVG and its passengers, this is good news as it becomes increasingly difficult to maintain service quality with the current rolling stock. The average age of the fleet is 28 years. The oldest vehicles are the A3 60 series, running in the small profile network, built in 1964 and therefore 55 years old (!). The metro system always suffers from lack of cars and availability bottlenecks. The delivery of the new Stadler trains will solve the issue.

The framework agreement includes a fixed minimum order quantity of 606 cars. Stadler will therefore supply 376 cars for two- to four-car vehicle units for the small and large profile sections of the network in a first call- off order from 2022 onwards. A further 230 cars have been ordered on a firm basis, but the corresponding call- off order will be placed at a later date. The framework agreement also provides for another optional call-off order for 894 additional cars. The volume of the firm order amounts to around 1.2 billion euros and includes the supply of spare parts. The framework agreement, of a total approximate value of up to three billion euros, is also one of the largest supply contracts ever awarded in Europe.

Since the Berlin metro system has two tunnel profiles, the so-called small profile with lines U1 – U4 (maximum 2.4 m vehicle width) and the large profile with lines U5 – U9 (maximum 2.65 m vehicle width), the new metro fleet will also be delivered in the two respective widths. The JK series will be used in the small profile network, the J series will operate on the large profile lines. The two variants will be very similar to each other in terms of exterior and vehicle design, as can already be seen in the design pictures. To ensure a high degree of commonality between both series, the interior and the doors distance of the JK and J series will be identical. As a result, the JK series will only feature two doors per side per car. To what extent this decision affects the passenger flow, the passenger change times and the interior design is yet to be seen.

This contract to renew the fleet for the Berlin underground network is a new opportunity for Stadler and BVG to work together. The Swiss rail vehicle manufacturer is already supplied the IK metro series to Berlin which are running on underground lines U1, U2 and U5. The new series, which is referred to as J/JK by BVG, is based on the familiar Stadler-METRO vehicles. The vehicles will be optimised in various ways. The depth of the door pillars has been adjusted to improve access, for example. Passengers will be able to board and alight even faster in future. Stadler also intends to relocate the information screens from the door area to the curved intercar connection between the side wall and ceiling, which will give a better view throughout the interior of the vehicle.

Stadler had already announced that it would invest up to 70 million euros in the Berlin-Pankow site. The new operating concept not only includes the construction of a new production hall, but also the creation of new, optimised space for logistics and commissioning. The investment is a clear commitment to the location in Berlin: besides building a new production and commissioning hall, the first step of the project will involve creating additional office space and a modern canteen for employees.