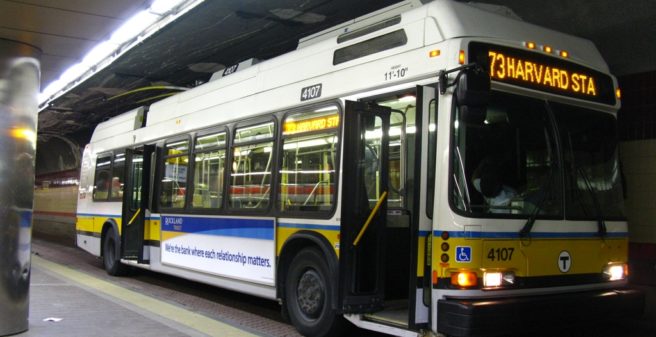 Boston, Massachusetts at one time had the third largest trolleybus systems in the USA and the current situation there presents an interesting illustration of the dilemmas facing transit managements across the country in relation to diesel hybrid buses, battery buses and, where present, trolleybuses. The trolleybus system in Boston opened in 1936 and over the years grew to a maximum fleet size of 453 vehicles.

The current system is a shadow of its former self but it does have some interesting features. It is clear that the system (or rather, two sub-systems) survived because of special requirements, both involving tunnel operation:

In each case the operations are served by a small fleet of special vehicles, but both fleets are approaching the end of their service lives. This presents a challenge for trolleybus advocates.

The Harvard Based Routes

Several trolleybus routes fan out from a terminal section in a tunnel at Harvard Square. The main ones are routes 71 and 73 which were converted from streetcar operation on 4th September 1958. The trolleybuses operate out of North Cambridge Carhouse and there is limited rush hour service to/from the yard, designated 77A. Finally, there is limited service along Huron Ave on route 72. This route was converted to trolleybus operation much earlier, on 2nd April 1938 but is out of use for quite some time already.

Three of the five Silver Line routes (SL1, SL2, SL3) are operated by articulated duobuses. They begin their routes in a short, wired tunnel (about 1 mile/1.6km) from South Station in downtown before reaching the surface and switching to diesel electric mode at Silver Line Way station.  From there the buses operate mostly on normal roads and highways. The first route began operation on 31st December 2004. The fleet consists of 32 Neoplan AN460LF articulated duobuses with Skoda Traction equipment. As with the Harvard tunnel routes, the fleet viewed as nearing the end of its service life, despite a mid-life overhaul conducted between 2015 and 2018. The plans for a replacement fleet again contribute to the current controversy.

The transit authority (MBTA) management has a dislike of trolleybuses and would like to eliminate the mode from their bus fleet. While it isn’t totally clear what the real reasons for this attitude are, here are some are the factors (spoken and unspoken) that seem to influence their attitude.

The MBTA began trials both of hybrid buses with extended battery-electric range and a test fleet of articulated battery electric buses from New Flyer for use on the Silver Line.

The New Flyer XE60 articulated battery buses are equipped with a 480 kWh battery and have a claimed range of 100 to 120 miles per charge. In practice their performance has been disappointing, achieving mileages in the range between 60 miles and 110 miles per charge. Even the claimed range of 120 miles is insufficient for the daily duty cycle of miles of up to 170 miles over 18 hours. In sub-zero temperatures the buses only did 60 miles on a full charge and needed to return to the garage for a full recharge after the morning peak.

According to a report to the Financial Management Board, “the technology is not yet mature enough to support full bus service operation.

But despite these glaring shortcomings, MBTA is committed to further deployment of battery buses, at least on the Harvard tunnel routes. But these proposals do not make sense either in terms of economics or in political appeal.

Because of the limited capabilities of battery buses, replacement of 28 trolleybuses would require 35 battery buses. Even allowing for a higher price for trolleybuses compared with battery buses ($1.2m vs $1m) the battery bus fleet acquisition cost would be slightly higher than for battery-trolleybus, a total of $35m vs $33.6m. The cost of fixed plant at North Cambridge Carhouse is budgeted at $21m. This expenditure would be far greater than any remaining upgrades needed to the trolleybus overhead on this network, which is estimated by local advocates to cost only $4m. And suggesting that $56m should be spent on battery buses to replace an existing electric fleet rather than some of the 1000 diesel bus fleet will be a hard sell to environmentally conscious voters.

Meanwhile, on the Silver Line, the current policy is to replace the 32 duobuses with 45 hybrid buses with extended battery range (“Enhanced Electric Hybrids”). It is true that some form of replacement fleet is needed but no consideration has been given to the use of battery-trolleybuses with In Motion Charging. With careful planning and limited investment (one mile of overhead and a small substation at the outer end of SL3 in Chelsea) it would be possible to convert the tunnel routes to 100% electric operation using battery-trolleybuses.

The case for trolleybus retention

A local transport advocacy group, Transit Matters, has been vociferous in its criticisms and has been calling the local MBTA management to account.

Transit Matters have been working with two other groups, the Sierra Club and ITDP on an alternative electrification plan, which calls for total bus electrification by 2030.  This would see a phased introduction of electric vehicles, using a mixture of trolleybuses with IMC and battery buses. The report states that, “MBTA will need to optimise a mix of electric technologies”.

The first two phases would exploit the synergies offered by In Motion Charging. The existing trolleybus overhead and substations could support complete electric operation of all the Harvard tunnel routes, including existing diesel bus routes 74,75,77, 78 and 96. And as discussed above, limited additional investment would allow battery-trolleybus operation of Silver Line routes SL1, SL2, SL3. A total of 85 IMC trolleybuses would be sufficient for these two areas of operation. With possible additions, the trolleybus element of the first two phases would introduce up to 100 battery trolleybuses to these routes. Equally, routes based at the new Quincy garage are deemed to be most suitable for battery buses with opportunity charging.

The report is open about the choice of technology. For Phase 3 and Phase 4, the report suggests that the technology chosen for particular sectors of operation should be based on the experience gained during the initial phases.  This may be a politically shrewd approach, as it deflects criticism from the battery bus lobby while allowing battery-trolleybuses a chance to prove themselves in the real world.

It will be interesting to see whether the level of local resistance to trolleybus abandonment and the high quality of the latest report will have any effect. In terms of “optics”, MBTA’s position looks weak. They clearly state that battery buses are not yet commercially viable, but blithely propose to make the first use of battery buses as a replacement for the electric trolleybus fleet at North Cambridge rather than choosing a diesel fleet. And while they follow the official political line of a move towards mass utilisation of battery buses, they clearly have doubts about the maturity of the technology and are proposing major purchases of hybrid buses with extended battery range, not only for the Silver Line but for other sectors. The publication of the latest report may well be timely and lead to a policy rethink.

I’d like to know what Harvard University has to say about this!

I really hope that common sense prevails and that the trolleybus system is upgraded with new equipment and trolleybuses. Take a look over the border at Vancouver if you will, for an example of efficient operation. If the ‘intelligent’ people in power think this is an outdated mode, they may like to visit some of the many modern trolleybus systems now operating in Europe, where new systems are opened on a regular basis. Those cities (hundreds world-wide), plus numerous manufacturers and suppliers, cannot all be wrong. Just how much real investigating and costing have they done (real, accountable investigating, not the tripe that is so often churned out, without any real foundation in genuine facts). Is America still that backward thinking? I always thought it was at the head of innovation, logic and basic sense!

Total ridership on 71-73 isn’t that high, & represents only a small fraction of total MBTA bus ridership. Airport Silver Bus on the other hand needs double articulated buses like the ones Urban Transport recently reported on in Aalborg. Better yet, another harbor tunnel just for light rail…..but remember we’re talking about Boston 🙄 🙄. But such things as double articulated buses; that’s out of the question as Boston is in the United States, and pretty much anything innovative when it comes to public transportation is outlawed in the Constitution.

Thank you Martin for the excellent article on the issues regarding Boston’s trolleybuses, the institutional bias against them, and the less than stellar performance of battery buses.

I’ve never understood this at all, why replace an alrea