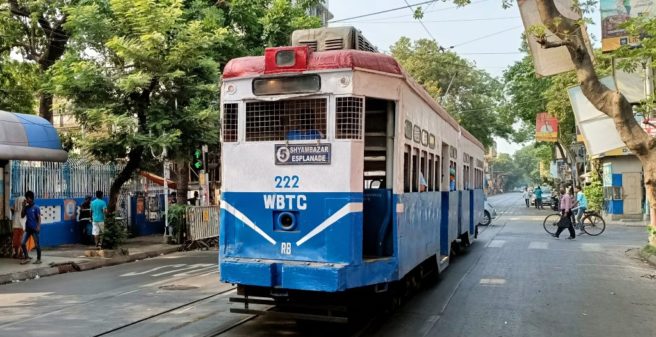 Calcutta (Kolkata) has the last surviving tramway system in India. The system has been in decline for many years due to a lack of investment in the aging infrastructure and fleet. But now, some signs of hope are on the horizon.

Kolkata (Calcutta) tramways is a living heritage site under threat. In Calcutta, the tram was established in 1873. This is a unique mass transport system in Asia that was never discontinued and still uses the same technology, tracks and tractions and service area as the electrification system was installed starting from 1902. Today, the congestion and pollution from other modes of transport coupled with the great affection that the trams have from the daily commuters makes it a heritage worth preserving. It is a shift in mindset: People not only see it as theirs, they see it as an answer for the problems of the present.

Calcutta Tram Users Association (CTUA), a citizen’s forum was formed in December 2016 to create public awareness about the benefits of trams in general, garner public support for the ailing tram system of Kolkata and also to find ways for the betterment of the city’s tramways. Until this association was formed there was no consolidated public voice in support of Kolkata’s trams and a need for the same was keenly felt at that time as the tram system was in serious decline in 2016. CTUA aims to open a constructive dialogue with the State Government to find ways of resurrecting and reviving the tramways. They have also undertaken various activities both on the ground as well as in the virtual space to raise awareness about the need to modernise and expand the city’s tramways. Activities include protest vigils, distribution of leaflets, taking part in forums and seminars, engaging with the media, signature campaigns, petitions, undertaking audits of tramways assets, connecting with foreign tramways associations, urban and transport planners etc.

The public support has been encouraging and CTUA hopes to make a tangible impact on Kolkata’s tramway legacy and future progress. The association grew out of the Kolkata- Melbourne Tramjatra festivals, a brainchild of Roberto D’Andrea, a retired Melbourne tram conductor / driver. He has been organising this unique inter-cultural arts project since 1996 and is a true crusader of Kolkata tramways. It was during a trip to India in 1994 when Roberto first stopped by to have a look at the tram system in Kolkata. He instantly fell in love with the city and its colonial treasure and formed a warm friendship with the tram workers of Belgatchia Depot. Calcutta and Melbourne are two of the rare surviving tramway systems of continuous operation outside of Europe. When the Calcutta tramways were faced with a threat of closure in 1996, Roberto and others from Melbourne responded to pleas of help and Tramjatra was born – a collaboration between the tram workers and tram loving communities of Melbourne and Kolkata – celebrating the unique tramway cultures of the two cities. Over the years, as a part of tramjatra, Roberto has brought in tram workers and experts from Melbourne with the intention of upgrading the existing infrastructure of CTC. One such endeavour resulted in the concretisation of few routes. Nowadays Roberto continues to support similar endeavours and is trying to establish a contact between the two local governments i.e. Melbourne and Kolkata for the benefit of Kolkata’s tramways.

Commemorating the 140th anniversary of Calcutta Tramway Company (CTC) the concept of “TRAM WORLD” was introduced. The Tram World Kolkata (TWK) will be established the Gariahat Tram Depot, near the Ballygunge Phari. The TWK has been conceptualised by West Bengal Transport Corporation that runs the Kolkata tramways. “The Tram World Kolkata will be a unique gift for tram lovers, “said *Rachhpal Singh, Chairman WBTC*.

“The idea behind Tram World Kolkata is two folds. Old trams, that would have been forgotten, have been transformed into a new life. Also, people can visit the TWK and immerse into art, tram love, music etc. The idea is to attract youth to Kolkata’s culture”, said Rajanvir Singh Kapur, MD WBTC, A special thanks to the young minds of Arghyadip Hatua & Abhishek Acharya for their constant support & idea. The TWK is being positioned not as a museum but a place where all can visit to get into tram nostalgia and also to have a good time. “The TWK would not be a museum. It is much more. It is a place where one can come and spend some quality time. There would be art, music, food, a place for adda and tram love” said Rajanvir Singh Kapur, MD West Bengal Transport Corporation Limited (WBTC), the operator of the tramway since 1978 (previously Calcutta Tramways Company Ltd.).

The Tram World converts old trams that would have headed to scrapyard, into a permanent area where tram lovers and connoisseurs can visit and spend some quality time. The TWK has taken up old tram bogeys, as old as built in 1938, and they have been made into zones of art, music, photos, museum, food etc. An exhibition of more than 20 historic tramcars has been created and is open to the public.

After several years of service interruption due to street and metro construction works, and more recently also a s consequence of damages caused by the cyclon Amphan in early 2020, the remaining tramway network saw some minor investments in the infrastructure. The traditional interchange at Esplanade has been reconnected to the network and is now terminus of routes 5, 25 and 36. Six lines are included in the current the network, numbered 5, 11, 18, 24/29, 25, and 36:

These lines mostly operate at an approximately 15 minutes headway, however, the consequences of COVID19 reduced the operation during past few months considerably, as well as another cyclone at the end of May 2021. Currently regular service is limited to routes 5, 11 and 25, but restoration of service is expected soon. In particular, the long-announced resumption of service on Line 36, which has been out of service for years, is attracting a great deal of interest.

Most of the operating tramcars have received a paintwork using the actual blue and white colors. Special trips are arranged for tourists and visitors of the city as well as two dedicated round trip services.

In den vergangenen Wochen hat sich allerdings die Haltung der lokalen Kolkata Police Verwaltung als weitere Recently, however, the attitude of the local Kolkata Police administration has emerged as another threat to the longer-term future of the system. The police authority has been lobbying for the short-term dismantling of tracks on various routes that have been temporarily closed due to road and/or metro construction works. They allegedly are considered as dangerous to the general traffic on the roads. This applies to SN Banerjee Road, Bidhan Sarani, Rabindra Sarani, Galiff Street and around Belgachia Bridge, among others. The West Bengal Transport Corporation (WBTC), as the operator of the tram, is vehemently opposing these measures, highlighting the planned reopening of various sections in the coming months. In fact, this is a dispute with a political background – most recent comments from the Ministry of Transport suggest that these measures will currently not be implemented.

To ensure the long-term future of this unique tramway system and to give it back at least part of its previously important role as backbone of Kolkata’s public transport network, significant further investments are needed, in context with a long-term public transport strategy for the city. As in other parts of the world the tramways could play an important role in addition to the 2-line metro system, for the benefit of the 8 million inhabitants of the city. With investments for modernization and gradual expansion of the system in order to convert it into a modern, efficient low-floor light rail system Kolkata could set a remarkable example for the entire region.

Very informative
Keep it up

Route 18 & 36 is now permanently closed due to a rule of government that a tram running on bridge will collapse the bridge. So those routes will never reopened. At present route 11 is also suspended due to another never-ending Posta flyover destroying.