VAG Nürnberg: „We will replace all diesel buses 1:1 by electric buses“ 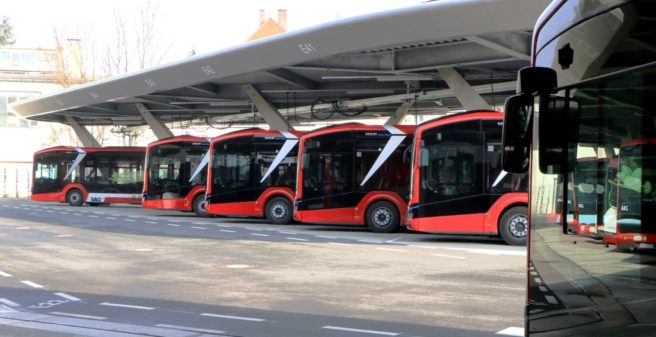 Nuremberg is making big steps to move foreward when it comes to electrification of its bus fleet: After seven Solaris Urbino electric supplied since 2018 (two of which are articulated), VAG Verkehrs-Aktiengesellschaft Nürnberg (VAG) just recently took delivery of a total of eleven 12-metre e-buses and 28 articulated e-buses of MAN’s Lion’s City 12 E and 18 E models – all arrived by February 2022. The 28 Lion’s City 18 E are among MAN’s first ever electric articulated buses. We reported here before:

In September 2021, VAG also commissioned the so-called “eBus Port” at its Schweinau bus depot, which provides covered charging spaces for 39 battery buses. Siemens supplied the charging infrastructure, there is one charger for every 2 buses, each charger has two charging plugs. Michael Sievers, Business Unit Manager Bus Workshops at VAG, and Andreas Laumen, Project Manager eBus at VAG, presented the “eBus Port” and the company’s electric bus strategy to UTM during a recent visit.

In a next step, the conversion of today’s covered depot facilities for electric bus operation is planned because VAG is continuing to expand the use of e-buses – all diesel buses are to be replaced by electric ones by the beginning of the 2030s. However, this basic intention can only be implemented on the condition that the federal and state governments provide sufficient subsidies to cover the additional costs.

Bus procurements for 2022 and 2023 include a total of 46 units, 30 of which will be articulated buses. All theses vehicles will be electric. After the tendering process was completed, Mercedes-Benz was awarded the corresponding supply contract in October 2021.

33 eCitaro and eCitaroG will be delivered from autumn 2022 and should all be in use by the end of the first quarter of 2023. The rest will follow by mid-2023. These 46 vehicles and also the MAN e-buses that have now all been delivered were subsidised with federal funds – new applications are currently underway for a further 56 vehicles, again mainly articulated vehicles, for delivery in 2024/25.

The procurement strategy is carried out in consensus with the city of Nuremberg on the assumption that public transport – even if it already has a good ecological balance per se – should use all options. The type of energy generation also plays a role. As early as 2012, VAG had decided to procure only green electricity in the long term. Before that, roof surfaces had already been equipped with PV elements. Since last summer, the electricity for the electric buses has been drawn from a PV system in the region – VAG also wants to send an important signal for a (regional) energy and transport turnaround. All electricity is drawn from the region’s medium-voltage grid.

Together with its sister company and regional energy supplier N-ERGIE, Verkehrs-Aktiengesellschaft Nürnberg is working on a comprehensive software package for the energy-efficient optimisation of E-bus operations and charging cycles. The majority of the charging processes take place during off-peak times. The coupling of the actual charging times to the deployment planning of each individual vehicle has the clear goal of raising cost and consumption efficiencies and at the same time ensuring an optimal operational sequence oriented to demand.

In practice, this means that the bus driver parks his vehicle as usual and connects the charging plug, but the software controls the start and end of the actual charging process.

VAG’s experience with the electric buses procured so far has been positive. All of the new MAN Lion’s City 12E and 18E have heat pumps on board, the air conditioning is exclusively operated in electric mode.

The 12-metre-buses of the new order will have 588 kWh battery capacity and the articulated buses 680 kWh, which should ensure sufficient range without recharging. In the long term, VAG expects that all e-buses will be able to cover a daily range of 250 km. This would mean that 94% of all current vehicle shifts could be operated without recharging, and only the remaining 6% would require an intermediate stop at the depot. Under these circumstances, Michael Sievers’ statement no longer seems totally bold: “We will replace all diesel buses 1:1 with electric buses, we will not increase our vehicle fleet through the conversion.”

VAG currently has 216 buses in its fleet, of which 203 are scheduled to operate on Nuremberg’s roads during the morning peak.