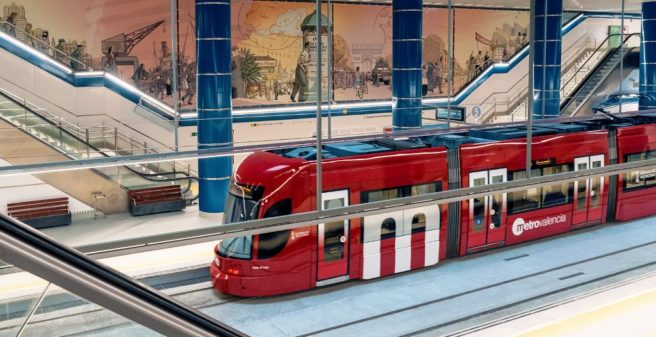 For almost 12 years tram tracks lay in the ground near Valencia’s well-known art and science centre with its eye-catching buildings which are among the prime tourist attractions. In 2010/11, the financial and economic crisis had caused numerous infrastructure projects to fail in Spain.

In Valencia, this included the construction of a 5.1 km, partly underground tram line between Alacant station in the centre and the southeastern district of Natzaret via the “Ciutat de les Arts i les Ciències” (Spanish: “Ciudad de las Artes y las Ciencias”). The on-surface part of the route including tracks was practically finished, as was the shell of the tunnel section, when money ran out, forcing the regional government to completely halt construction in 2011. For years, it was discussed whether construction would ever resume. Finally, in 2018/19, with the help of additional funds and subsidies, the time had come to lay tracks in the tunnel, expand the stations and build the overhead line, power supply and other infrastructure along the entire route. And was finally able to open the new T10 line today, 17 May 2022 – 15 years after the original start of construction.

After an official inauguration ceremony with politicians and representatives of the city administration service began at 1.30 pm. Seven Bombardier Flexity low floor tramcars are available for service, as they have been for years on other lines of the Valencia regional rail operator FGV (Ferrocarrils de la Generalitat de Valencia). FGV operates Tram and Metro Valencia asd well as the tramway network in and around Alicante. For use on the new T10, four trams from Valencia and three from Alicante were transferred and painted in new red and white colours – the future standard colour of FGV.

The line runs isolated from the rest of the tram network in Valencia, so the construction of a small depot with workshop in Natzaret was necessary. Three of a total of eight stops and 2.2 km of track are undeground in a tunnel, the rest has been built on separate alignment with traffic light priority. The route is covered in about 17 minutes – on weekdays, the trains operate every 15 minutes from 5.30 a.m. to 10 p.m., and the service ends at 11.25 p.m.

It has already been decided to build an extension of the line to the beach suburb of El Grao, where there will be a connection to the existing tram network. In addition, a new direct connection from Alacant to El Grao (Dr. Lluch) will be built as future line T11 plus a branch to the Hospital La Fé, which will be served by a new T12 line. However, this will probably take another 4-5 years to be completed.