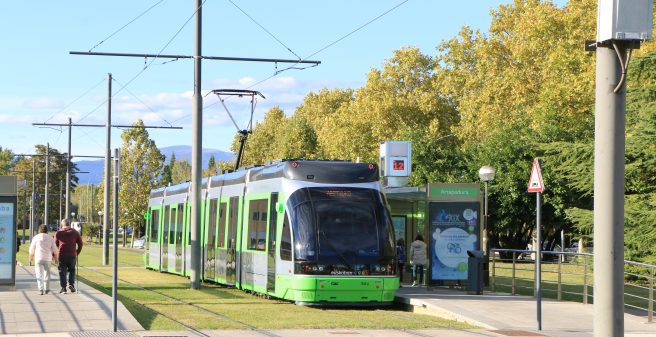 Of the several completely new tramway systems, which opened in Spain in the past 15-17 years, the network in the Basque capital city Vitoria-Gasteiz is without any doubt among the most successful ones. The two tramlines are well integrated in the urban landscape and highly recognized as a vital contribution to the city’s transformation into a more sustainable model.

After the inauguration of the lines in 2008/9 and a minor extension in 2012, further expansions to cover other parts of the town that were not served yet by the tram became an important point on the agenda of local politicians and the municipal administration. During 2014/15 plans got more precise when a 1.7 km prolongation to the housing area south of the city center and the Univeristy district was formally approved. This 4-stop extension starts at the current inner-city terminus Angulema and includes a short single-track section on its way. Construction work is well advanced and the opening is envisaged for late autumn this year. A second expansion was approved at the end of 2018. It is a 2.5 km branch of the forementioned project and will provide a link via Paseo de la Iliada to Bulevar de Salburuna east of the city center. Opening is expected in late 2020/early 2021.

The plans to built a completely new, third tram line were discussed over a lengthy period of time but finally dropped in favor of a full-electric bus route to BRT standards (Bus Rapid Transit), which means a high percentage of right-of-way for the vehicles. The public tender for the turn-key project was awarded to the Spanish Irizar group. Irizar will supply 13 of its e-buses called „tram ie“ and will also install the necessary infrastructure. This includes opportunity charging stations at two points of the circular route, at Mendizorrotza and El Boulevard, and the overnight chargers for the depot. The vehicles will be seven articulated and six 12m- buses.

The „tram ie“ model was tested in passenger service in nearby Bilbao (and some other places) and has commenced regular operation in a few cities already, e.g. Barcelona, Amiens and some others.

Completion of the installion in Vitoria is foreseen for early 2021. The route will have a length of 10.5 km. “Bus Eléctrico Inteligente” (BEI) will be the local denomination of theproject.