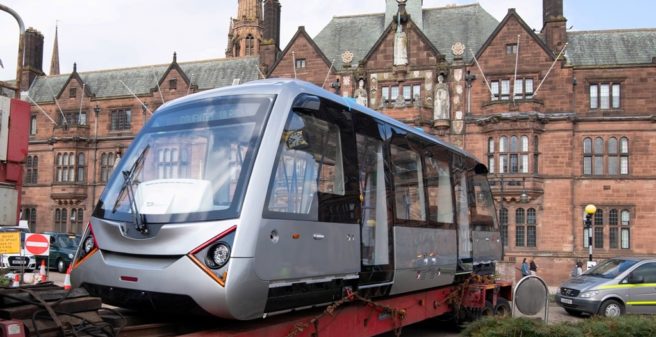 In London, Birmingham and Manchester, urban rail projects have encouraged thousands to take zero emission journeys instead of jumping in the car. But for many cities, urban rail is simply not an option – the costs are too high, the streets too narrow, and existing infrastructure presents too costly a barrier to remove.

Coventry is building something different; a new urban rail system which could allow other similarly sized cities and towns to benefit from urban light rail.

Dubbed Coventry Very Light Rail (VLR), Coventry City Council is working with researchers and engineers from WMG at the University of Warwick, to develop a new kind of vehicle, alongside a new track, to enhance the business case for urban light rail in places like Coventry.

The new vehicle, pictured, differs significantly from trams and is about the same size as a single decker bus, having roughly the same capacity – 56. It’s designed to have a 15m turning circle, meaning it can get round the tight corners in Coventry’s roads. It’s battery powered, meaning it’s locally zero emission and doesn’t need overhead cabling. Recharging is done via pantograph at Furry&Frey fast cargers along the future line. And by making use of lightweight materials, it puts less pressure on the road, enabling the design of an entirely new kind of track.

The track is where the significant cost savings come in. Sitting beneath today’s roads is a crisscross of utilities – gas, water, internet – which can be extremely costly to relocate. This means traditional urban rail can cost anywhere between £25m and £50m per kilometre – with £100m not unheard of in some city centre locations.

The new track, designed from scratch in partnership with WMG and Ingerop, will sit just 30cm into a road surface, minimising the need to move utilities. As a result, Coventry City Council estimates the new track could cost closer to £10m per kilometre to install.

“The track is really what brings this project together”, says Darren Hughes, Associate Professor at WMG, University of Warwick. “In addition to savings made by removing the need to divert utilities, we expect the track’s shallow nature to speed up installation, too. It is envisaged that sections of the new Coventry Very Light Rail track could be completed within a few weeks rather than months as is typically needed when installing conventional track in complex city environments.”

The first use case

While work is ongoing on proposed first route, it has been confirmed that it will connect the city centre and railway station with University Hospital Coventry & Warwickshire. Future routes will focus on areas likely to see high uptake of the system.

The Coventry VLR vehicle has been exhibited on different places and will shortly move from Coventry to the VLR National Innovation Centre in Dudley, the UK’s first site dedicated to VLR technology, to undergo extensive testing. By 2024, the Council hopes to have installed a city demonstrator route in the city centre, to showcase the technology to other local authorities, with the first full route expected to be complete in 2026.

Councillor Jim O’Boyle, cabinet member for jobs, regeneration and climate change at Coventry City Council and board director at Coventry and Warwickshire Local Enterprise Partnership (CWLEP), explains: “As a city, it’s important for us to provide people with a number of attractive, affordable and green options to encourage a shift to public transport, both in an effort to fight climate change, and also to address air quality.

“I’m extremely excited about our Coventry Very Light Rail project, we’re taking advantage of a unique opportunity and it’s one that could transform public transport.  Our city led the transport revolution, and we have some of the best engineers in the world working to improve public transport and tackle climate change. With Coventry VLR we’re building a unique mode of transport with the potential to make cities and towns across the UK even greener and more interconnected.

Councillor Simon Phipps, cabinet member for regeneration and enterprise at Dudley Council, said: “Dudley Council is working closely with BCIMO and Coventry to drive this fantastic project forward and we are incredibly excited about the Coventry VLR vehicle coming to Dudley. This project is one of a number of exciting rail programmes taking shape and it puts Dudley a step closer to becoming a global leader in rail innovation and greener transport solutions.”

The project is part of the West Midlands Combined Authority’s City Regional Sustainable Transport Fund bid, and is expected to be awarded at £54.9m. The project has also received funding from the Coventry and Warwickshire Local Enterprise Partnership and the Council itself.

Still think they should be using the LR55 track beam for the unimproved road sections that can be slotted into existing bitumen road base.