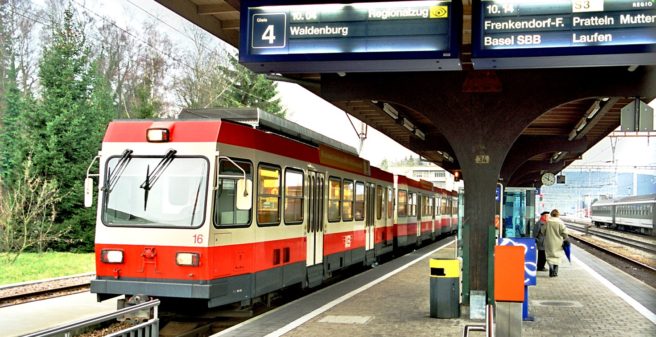 In the near future, the current 750 mm gauge Waldenburg Railway will be converted into a metre-gauge, low-floor, electric tramway operation. The operator Baselland Transport AG (BLT) has ordered 10 Tramline tramcars from Stadler. Located in the Swiss canton of Basel-Landschaft, the 13.1 km long railway line offers a suburban electric rail service from Waldenburg to the connecting station of the SBB in Liestal. It is one of only a few electrically operated lines on 750mm gauge, using 1,500 V DC power supply.

The entire fleet of electric train sets will be sold to the Slovak company Ciernohronska zeleznica (CHZ). Several other offers, including one from Madagascar, could not be seriously considered. The sale includes all four-axle bogie motor cars of the BDe 4/4 type and ten matching driving trailers. All of them were built between 1985 and 1993. The purchase price for all vehicles combined is only SFr 80,000 and the contract was signed on 03 April 2020. The vehicles remain in service until the 750 mm gauge service in the Waldenburg Valley will be terminated, which is scheduled for 6 April 2021. The start of the new, metre-gauge tramway service number 19 between Liestal and Waldenburg is scheduled for December 2022.

In Slovakia, the vehicles will be used on the so-called Čiernohronská železnica n.o. 760 mm gauge railway line (“Schwarzgranbahn” in German language), which currently operates as a pure tourist railway on a reopened section over 16 km between Chvatimech and Cierny Balog, usually with steam locomotives. Electrified and totally refurbished, a daily public train service will be offered by 2025, if all plans materialize. The steam trains for tourists will be retained. As a well-known feature, the railway tracks of this line pass directly through a local football stadium in Cierny Balog – a curious situation, which probably evolved in the time-span between the closure of the railway as a public transport service in 1982 and its reopening as a tourist railway ten years later.

Very nice – but for we inhabitants of the Waldenburgertal, it’s going to be an almighty mess and inconvenience until December 2022!