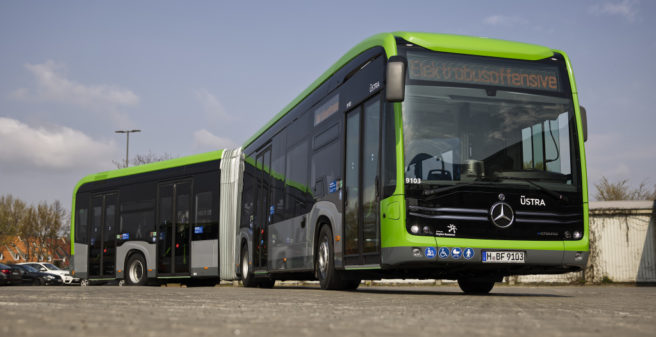 Three years after its world premiere, we have an update for the fully electric eCitaro city bus: Mercedes-Benz is switching to an even more powerful generation of lithium-ion batteries. The first eCitaro G articulated buses have now been delivered to Hanover’s transport operator, ÜSTRA. They are part of a large-scale order and also an important element of an ambitious plan to electrify bus transport in Lower Saxony’s capital.

“Our new, state-of-the-art articulated buses are making an important contribution to climate protection and the transition of transportation away from combustion engines,” says Denise Hain, ÜSTRA’s head of operations and personnel, “They are an important element of climate-friendly mobility in Hanover. They are locally emission-free, quiet and very well equipped.” Mirko Sgodda, Head of Sales, Marketing and Customer Services at Daimler Buses: “We are delighted that ÜSTRA chose the Mercedes-Benz eCitaro G with the new generation of batteries. Our high-tech city bus is safer, more environmentally-friendly and more comfortable. It constitutes a significant milestone on the way to improving city life.”

The two new eCitaro G buses for ÜSTRA feature second-generation lithium-ion batteries. Their capacity is about a third higher than that of previous batteries so that the range between recharging stops is increased considerably. The articulated buses for Hanover are equipped with ten battery packs which provide them with a remarkable total capacity of 330 kWh. In addition, current collectors – for which the technical term is pantograph – are installed on the roof for intermediate charging at the final bus stop on routes.

The new vehicles are part of an order from ÜSTRA for up to 48 city buses. The order comprises 30 eCitaro solo buses and 18 eCitaro G articulated buses. The first eCitaro buses have been in operation since September of last year in Hanover. As part of their campaign to switch over to electric buses, ÜSTRA intends to drive electrically with 48 electric buses on all inner-city routes within Hanover’s low-emission zone by 2023. The switch-over could save 3800 tonnes of CO2 every year. Read our report here: https://www.urban-transport-magazine.com/en/hannovers-ustra-orders-48-mercedes-benz-ecitaros/

At the same time as the buses go into operation, the final bus stops on the inner-city bus routes will all be equipped with the necessary charging infrastructure and both bus depots will be converted to accommodate the charging and maintenance processes for the electric buses – also by 2023.

The fully electric eCitaro G buses at ÜSTRA are not only fitted with powerful technology, but also with equipment that is particularly conducive to passengers’ well-being. Four double-width doors ensure rapid passenger flow at the bus stops. All of the doors have light strips with green or red LEDs to highlight the floor edges at the entrances. Passengers with restricted mobility board the bus at door two using an electrically operated cassette ramp.

In the area around the second door there is a special-use space for wheelchairs and prams. At the rear of the bus, there is also a second special-use space for prams opposite door three. All these areas are fitted with comfortable upholstered pads to lean on in the standing section or folding seats. Two TFT double monitors, one in the front and one in the rear, provide passengers with information about the bus’ progression along the route or entertain them with passenger TV. 13 double USB ports supply passengers’ personal mobile devices with electricity and a WiFi router connects them with the Internet.

The driver cockpit is also comfortably equipped. The separate air-conditioning system as well as the heated and climatised seat with electrically adjustable lumbar support deserve a particular mention. The inside rearview mirror and the roller sunblind are also electrically adjustable. The EDF Eco Driver Feedback technology contributes to an economic driving style with the goal of achieving maximum energy efficiency. The driver’s cab door has a partition across the complete width of the door while video cameras monitor the door areas and the passenger compartment. These features all add up to a greater feeling of safety.

Active safety is provided for by the exemplary equipment in the buses – the active braking assistance system Preventive Brake Assist, the turning assistance system Sideguard Assist and the standard Articulation Turntable Controller (ATC), an anti-jackknifing system. Its effect is similar to that of ESP. A reversing camera and an acoustic reversing signal prevent accidents when manoeuvring.

ÜSTRA Hannoversche Verkehrsbetriebe AG transports 172 million passengers every year making it the highest-performing provider of local transport in Lower Saxony. ÜSTRA operates 349 city trains, 142 buses and four electrically operated boats. The buses serve a network of 41 lines, measuring 540 kilometres with a total of 672 stops, which amounts to an annual mileage of more than twelve million kilometres.

Buses bearing the three-point star have played an important role in Hanover for a long time. To mark the world exhibition, Expo 2000, ÜSTRA received around 100 individually designed city buses based on the first generation of the Mercedes-Benz Citaro. At the time, both the interior and external design of the buses attracted a great deal of attention. Until 2016, these buses were an unmistakeable part of Hanover’s cityscape. The trend-setting interior design in particular gave numerous impulses. However one detail remains unchanged: the striking leather grab straps with aluminium trim inserts on the stainless steel ceiling handrails – they can also be found in ÜSTRA’s new Mercedes-Benz eCitaro G buses.