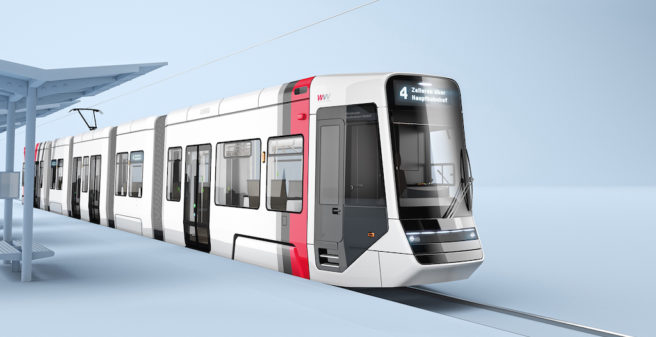 Surprise in the tram market: for the past decade or so, the German light rail market has been dominated by well-known companies such as Alstom, Bombardier, Siemens and Stadler. Recently, however, smaller providers such as the Leipzig-based company HeiterBlick have been gaining ground. The Würzburger Versorgungs- und Verkehrs-GmbH (WVV) selected HeiterBlick as the winner of a tender for 18 new low-floor trams.

After the Würzburg city council approved the financing of the new low-floor trams in January 2018, the 18 trams were tendered Europe-wide. HeiterBlick GmbH is the winner of the tender and will deliver the 18 new low-floor trams to WVV between 2022 and 2023/24. The new trams are a new development by HeiterBlick. The low-floor vehicles consist of five cars and offer 76 seats and 147 standing places. In addition to the multi-purpose areas, the new vehicles have large infotainment monitors, air conditioning systems and 20 USB charging sockets. Each vehicle will be motorised with 760 kW power in order to be able to operate on Würzburg’s steep gradients such as on the Heuchelhof-Berg route and in future also in Grombühl or the tight curves at the Löwen and Friedensbrücke bridges.

HeiterBlick built LeoLiner low-floor trams for Leipzig and high-floor trams of the so-called TW3000 Series for Hannover and Vamos light rail vehicles for Bielefeld in the past. HeiterBlick is also delivering new-built and refurbished high-floor trams to Dortmund. It is very likely that the new trams for Würzburg will be part of the Vamos product line.