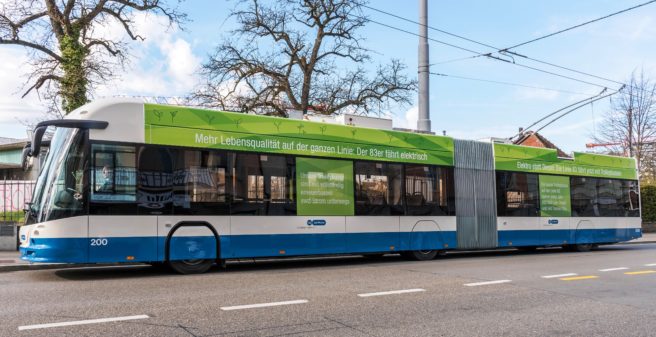 Zurich’s public transport service company Verkehrsbetriebe Zürich (VBZ) is about to expand its trolleybus fleet significantly by using the latest battery trolleybus technology. The traction batteries of these vehicles allow for extensive off-wire operations and get recharged while running on parts of the route under overhead.

In this context, the VBZ has started converting bus route 83 into an electric battery trolleybus line. A total of eight battery trolleybuses of the latest generation are going to gradually replace the diesel buses used so far. Since the beginning of service on the then new line 83 in December 2015, annual passenger numbers have increased from around 1.5 million to currently 2.5 million. Because of this strong and still growing demand, the services of line 83 were extended in December 2019 to all day services thoughout the week, including Saturdays.

Line 83 offers ideal conditions to switch it into a full-blown electric operation, as it runs completely underneath the existing trolleybus line 72 overhead lines on the section between Milchbuck and Hardplatz. The new battery trolleybuses do then complete the remainder of the trip to Altstetten station using their powerful traction batteries.

The VBZ purchased nine Hess battery articulated trolleybuses of the “lighTram® 19” model, which will also be used on line 72. The prototype of the Hess battery trolleybus model „SwissTrolley plus“, numbered 183, will also be in service on route 83. Since 2017, VBZ is part of a public-funded research project with special funding for investments like these. Hess delivered the first series vehicle to VBZ on 25 February 2020. Three of the nine new trolleybuses on order are in Zurich already – they are numbered 200 to 208. Starting on 18 March 2020, the first battery trolleybuses have been gradually introduced on line 83.

In the meantime, the Zurich transport companies have also started project planning work for the electrification of lines 69 and 80. If everything goes according to plan, they will be electrified in 2024 and 2025 respectively.