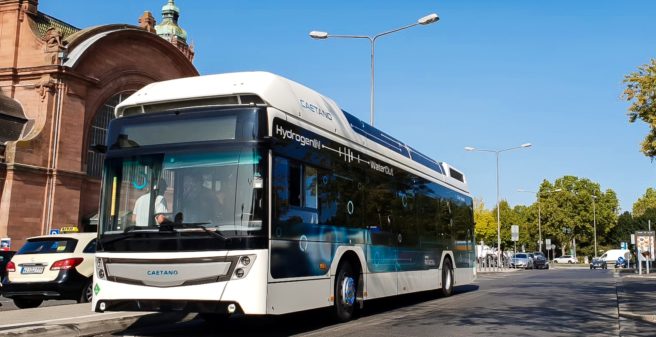 Caetano, a Portuguese bus manufacturer located in the town of Vila Nova de Gaia, is gaining a foothold in the German bus market. Not long ago Caetano was only known in Germany as a coachbuilder using chassis of well-known large manufacturers, like the Mercedes-Benz O 510 Tourino midi coach, which was based on a chassis from the Mercedes factory in Sámano, Spain, and for which Caetano supplied the body.

In the meantime, however, Caetano also supplies complete buses on its self-developed Caetano floor chassis. One example for this new strategy is the city bus series “City Gold”. Branded as “H 2.City Gold” Caetano offers its city bus with hydrogen propulsion and with it the Portuguese manufacturer is increasingly becoming more and more successful in Germany.

A first order was received last year from the region of North Friesland. There, two Caetano City Gold hydrogen buses will be delivered to the DB subsidiary “Autokraft” as part of the “eFarm project” in the Niebüll region. Four more Caetano hydrogen buses were ordered by “moBiel”, the transport subsidiary of Stadtwerke Bielefeld, just a few weeks ago. Another Caetano “H 2.City Gold” was recently on test at Regionalverkehr Köln. Read also about it here: https://www.urban-transport-magazine.com/en/caetano-and-toyota-first-orders-for-hydrogen-buses-in-barcelona-bielefeld-and-niebull/

Very recently, Caetano could report its first major order from a major German city. ESWE, Wiesbaden’s municipal public transport company, has ordered ten hydrogen buses of the type “H 2.City Gold”. The buses are supposed to be delivered in the fourth quarter of 2021.

The 12-metre long two-door buses will be used on Wiesbaden’s lines 16 and 17. They will have fuel cells from Toyota and batteries with a capacity of 44 kWh. Propulsion will be provided by a Siemens electric motor with a nominal power of 180 kW. The tank storage capacity is 37.5 kg of hydrogen, which gives the buses a range of more than 400 kilometres.