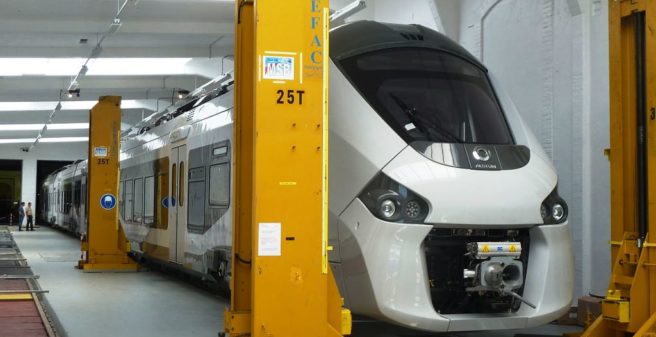 The "Régiolis" regional trains for the SNCF, known as "Coradia Polyvalent" at Alstom, are manufactured at the Reichshoffen plant I Licence CC BY-SA 3.0 (https://upload.wikimedia.org/wikipedia/commons/a/ae/R%C3%A9giolis_Alstom.jpg)

As reported by the newspaper “L’Alsace” on 13 October, the Czech Škoda and the Spanish CAF are bidding to take over the Alstom plant in Reichshoffen with 780 employees, which specialises in the construction of regional trains. As one of the conditions for the EU Commission’s approval of Alstom’s acquisition of Bombardier’s rail division to prevent the creation of a dominant position, the Commission has required Alstom to divest this plant. The acquisition of Bombardier is now expected to take place by the end of July 2021.

CAF has committed to produce in Reichshoffen

After analysing the projects of the Spanish CAF and the Czech Škoda, the trade unions are now commenting. In their opinion, CAF should be preferred. They think that it has an excellent technical capacity and a good commercial basis. Remember that since 2008 CAF already owns a small factory with 100 employees in Bagnères de Bigorre in France and is on the French market with deliveries and orders for trams and intercity trains, which allows it to more than triple its workforce there. CAF has also undertaken to produce all future orders won in France in Reichshoffen. In addition, CAF intends to develop the Alsace site into its centre of excellence in fuel cell technology.

According to an article in the French newspaper “Les Echos” from 23 October 2020, Alstom has now started exclusive negotiations with Škoda. No further information is available at this stage. However, Alstom is not forced to sell the plant in Reichshoffen at short notice. According to the newspaper report, European Competition Commissioner Margrethe Vestager is only interested in “exclusive negotiations” with a specific candidate in advance. If no agreement is signed by 31 July 2021, a trustee will be entrusted with the file, the article says.