Below budget and on schedule: Tampere tramway inaugurated! 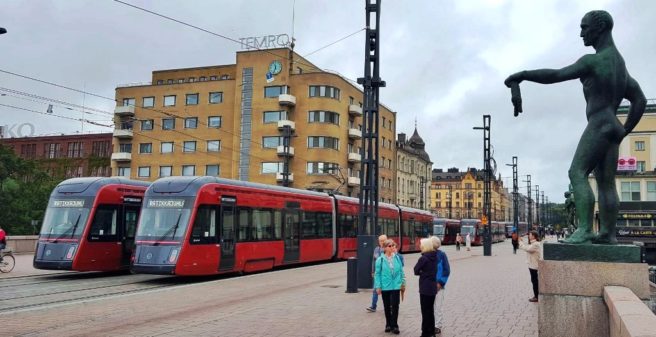 34 million EUR less than expected had to be spent and the planned opening date was met on time – that is by any means remarkable when it comes to the implementation of large infrastructure projects: We are talking about the new tramway in the Finnish city of Tampere, with 240,000 inhabitants the third largest town in the country.

Finland’s Prime Minister Sanna Marin and the Mayor of Tampere, Lauri Lyly, officially inaugurated the new tram on 8 August 2021, along with numerous other invited guests and many spectators. Eight of the new low-floor trams were presented in the city centre. Regular service on the first two lines 1 and 3 will start as scheduled on Monday 9 August 2021.

Stage 1 of the project includes Line 1 Sorin Aukio – Kaupin Kampus (TAYS University Hospital) and the Hervantajärvi – Pyynikintori section of Line 3. Both routes had been under construction since 2017. The year before, the city council had decided to build a low-floor tram system for Tampere, after long years of preliminary planning and discussion. Before that, the city had not had a tram, although there had been ideas to implement a tramway system for more than 100 years. A trolleybus service operated between 1948 and 1976.

For the project implementation, the so-called “The Tramway Alliance” was established, a consortium consisting of the City of Tampere, Tampereen Ratikka Tramway Company, NRC Group Finland, YIT Finland, VR Track Oy and Pöyry Finland Oy.  By the end of 2020, construction work was well advanced, test runs on the first sections of the standard-gauge network had already started in autumn 2020, and the first tramcars reached the city centre in November 2020, after delivery of the first units had begun in June of the same year. We reported aboutthe new system already here:

Skoda Transtech delivered 19 ForCity Smart Artic in special “Nordic” design, i.e. perfectly adapted to the special climatic conditions: The trams for Tampere are 37.3 m long and 2.65 m wide, are completely low-floor and offer a passenger capacity of up to 360. The all-wheel drives and a special body design should allow trouble-free operation in the Nordic climatic conditions, with long periods of particularly low temperatures and snow during the winter.

The design of the infrastructure follows patterns of new systems in other countries, with major part of the routes on dedicated alignment, simple but easily recognisable station design, detailed passenger information systems and preference for the tramway at intersections with car traffic. The aim is to provide the citizens with an attractive, convenient and fast alternative to the private car.

The tram operates at 7.5-minute intervals on working days, with longer headways at times of lower traffic volume. The 11.53 km long line 3 takes 30 minutes to ride from one end to the other, while the 4.74 km long line 1 takes just 12 minutes.

Phase 2 of the tram project is scheduled for three years of construction: Line 3 will be prolonged from Pyynikintori to Lentävänniemi. The opening date is set for 2024. Long-term planning includes further tram lines in the city area. But for now, everyone involved in the project is keen to see a wide acceptance of the new Tampere’s new public transport system

A video of the first revenue services on 9 August you may find here:
https://www.youtube.com/watch?v=DzpIBT_wUBk&t=5s

A detailed map can be found here:
http://www.urbanrail.net/eu/fi/tampere/tampere.htm
and in this new books published by Robert Schwandl:
http://www.robert-schwandl.de/skan/