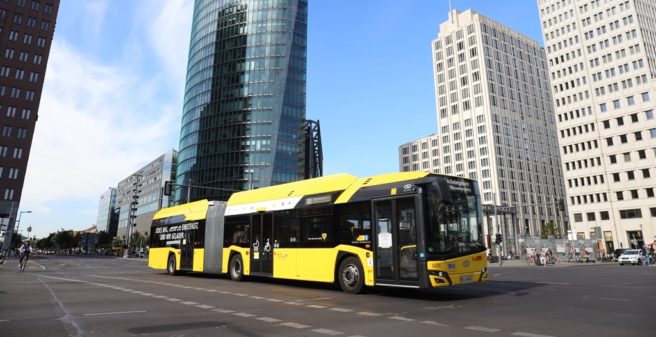 Berlin has 137 electric buses, 17 of which are articulated E-buses that have been in use on the E-metrobus line 200 since August 2020 I © UTM

At the beginning of this year, a piece of news made the rounds in the press: “Berlin has the largest e-bus fleet in Germany”.

The consulting firm PricewaterhouseCoopers (PwC) has analysed all e-bus fleets throughout Germany. For the year 2020, this showed that Berlin, with 137 e-buses, is clearly ahead of Hamburg (55), Solingen (54) and Cologne (45). In terms of the federal states, the first three places are occupied by North Rhine-Westphalia with 177 examples, Berlin (137) and Baden-Württemberg (76).

In 2020, a total of around 680 such vehicles were on German roads, including 502 battery buses, 81 trolley buses and 64 vehicles with fuel cell drives. Nationwide, the number of buses with alternative drives almost doubled last year.

The e-bus launch in Berlin

The use of electric buses in Berlin already began in 2015 on line 204 with inductive Primove charging technology (then Bombardier, now IPT Group). The first electric buses with overnight charging in the depot have been in use in Berlin since spring 2019.

The Berliner Verkehrsbetriebe (BVG) plan to convert their entire fleet to zero-emission vehicles with electric drives by 2030. A tender is currently underway for a further 90 e-buses. These are to be delivered in 2022.

With a reliability of more than 91 percent, BVG’s e-buses have covered more than two million kilometres to date. To push electrification further, BVG is currently preparing a tender for 90 more electric single-deckers to be delivered in 2022.

BVG’s e-buses currently operate on lines 142, 155, 194, 200, 250, 259, 294, 300, 347, 359 and N50. Due to construction work on the tracks of tram lines 12 and M13, Solaris articulated e-buses have also been used sporadically since January in rail replacement services between Prenzlauer Allee/ Ostseestraße and Pankow Antonplatz. Recharging takes place at the charging station at the Indira-Ghandi-Straße depot.

Due to the shorter range compared to diesel buses, electric buses will initially be used on shorter routes. However, it can be assumed that with the further development of battery technology, it will also be possible to cover longer distances in the coming years.

The “E-Metrobus” operation was launched on 27 August 2020. For the first time, all-electric articulated buses were put into passenger service in Berlin. Since then, a total of 17 Solaris Urbino 18 electric vehicles have gradually taken over operation on line 200. In regular operation, 14 vehicles are required.

The Solaris Urbino 18 electic are 18 metres long and offer space for 99 passengers. For the first time in Berlin, the new buses are charged within a few minutes via inverted pantograph at the terminal stops, giving them unlimited range during operation. The depth of discharge of the traction batteries is between 20 and 30 %. The fast charging columns required for this were supplied by Siemens. Two each were put into operation at the terminal stops Michelangelostraße and Hertzallee (at the station), one was installed at the depot in Indira-Gandhi-Straße.

BVG has joined forces with the Technical University of Berlin and the Reiner Lemoine Institute to form a research constellation for the “E-MetroBus” project. As part of the project, the TU Berlin is developing, for example, an e-bus guidance system with better range prediction, investigating the energy-efficient use of heating and air-conditioning systems and the environmental balance of the buses. In addition, the TU Berlin is helping to develop an operating and incident concept. The Reiner Lemoine Institute is conducting research in various scenarios on how a local, grid-serving supply of the charging stations at the bus stops and in the depot can be implemented. It has also developed an app with which passengers can calculate the CO2 footprint of their journey and find further information on the topic of e-buses and sustainable mobility. The link is here:e-metrobus.berlin

The total investment volume is around 16.7 million euros. Of this, BVG will cover the costs that would have been incurred for comparable diesel buses. As part of the funding guideline for electric mobility, the E-MetroBus project is being funded with a total of 4.3 million euros by the Federal Ministry of Transport and Digital Infrastructure. The remaining additional costs will be covered by the state of Berlin.

So far, the feedback from passengers and drivers has been exclusively positive.

Currently, 72 Solaris 12 metre electric buses are in operation. The buses are recharged twice every 24 hours at the depot on Indira Ghandi Street in the north-east of the city – at night and at midday.

BVG is working with renowned manufacturers for recharging and charging management.

The company PSI Transcom GmbH, which supplies the PSIebus system, was commissioned with the delivery of the depot and loading management system. PSIebus is dispatches, monitors and controls the vehicles. The PSIebus depot and loading management system coordinates, schedules the vehicles initially in the Indira Gandhi Street depot and ensures that all buses are reliably ready for use at the start of their journey. All depot processes from vehicle location, parking, supply and workshop, driver registration and vehicle allocation are mapped in a digital system.

The disposition of the vehicles takes place within a few seconds and is based on PSI’s optimization software Qualicision, which determines the best possible solution in real time based on the operational conditions. For an optimal result, not only the vehicle and route characteristics are taken into account but also time-relevant variables such as weather data for that day. The system also includes factors such as the remaining range, the charging status and the required time in the charge planning.

The integrated PSI charging management controls the entire energy demand of the depot and monitors and controls the individual charging devices. Expensive peak loads are avoided and the specifications of the network operator are taken into account. The new system enables the BVG to make optimal use of its vehicles and charging infrastructure and ensures the best possible vehicle availability.

Just seven weeks after the start of the project, the PSIsmartcharging charging management system integrated into PSIebus was successfully put into operation.

The system integrates, monitors and controls the charging infrastructure and coordinates the charging processes. It thus translates the operational requirements from the bus sector into a holistic charging strategy and also takes over the control and monitoring of the preconditioning of the buses. Communication with the depot management system integrated in PSIebus takes place via the VDV interface 463 developed by PSI.

First, the charging stations of the manufacturer Ekoenergetyka were connected. PSIsmartcharging uses the OCPP standard for their technical integration. The functionality was presented and demonstrated in predefined BVG test scenarios. In the further course of the project, the entire charging infrastructure of the depot of the manufacturers Ekoenergetyka and XCharge will be integrated into the system in phases and controlled centrally.

The chargers are equipped with a liquid crystal display, CCS connector and RFID proximity reader. In order to ensure maximum safety for both drivers and service personnel when connecting the power supply to the buses, the charging stations have a housing construction with a swing arm for feeding the CCS cable. This eliminates the possibility of any collision with approaching buses. Moreover, this solution minimizes the wear and tear of CCS components during operation. Furthermore, the entire infrastructure has been equipped with a diagnostic system.

E-bus monitoring via a cloud

The e-buses are monitored using a cloud-based telematics solution from ViriCiti. This means that BVG can view real-time parameters such as the location of the buses, SoC, incidents and more. In addition, BVG has access to historical data that allows them to track and analyse E-bus parameters in milliseconds.

ViriCiti has been integrating BVG buses since 2016, the transport operator being one of the first German operators to choose for a data-driven approach for e-mobility.

Due to a great collaboration with Solaris, the Solaris e-buses ordered by BVG arrived with ViriCiti’s hardware preinstalled. Furthermore, for these buses, ViriCiti also provides visibility into a series of 15 key parameters of the Minimal Data Set (Minimaldatenset) that were added specifically for BVG.

In 2019, a feasibility study was carried out in which it was shown, using the bus network in Berlin-Spandau as an example, that the implementation of hybrid trolleybuses/BOBs is technically feasible in principle. According to the study, the use of trackside loader technology could be particularly interesting for the electrification of double-articulated buses. We reported here:

Based on a planning mandate from the Senate Department for the Environment, Transport and Climate Protection (SenUVK), BVG is currently creating the initial, necessary framework conditions (e.g. an operating concept) for the initiation of preliminary planning. The project is therefore still in an early phase. The finalised concept will then be coordinated with the public transport authority, the State of Berlin, represented by SenUVK.

[…] is one of the European leaders in transitioning to e-buses. PricewaterhouseCoopers (PwC) found that, in 2020, Berlin had 137 […]