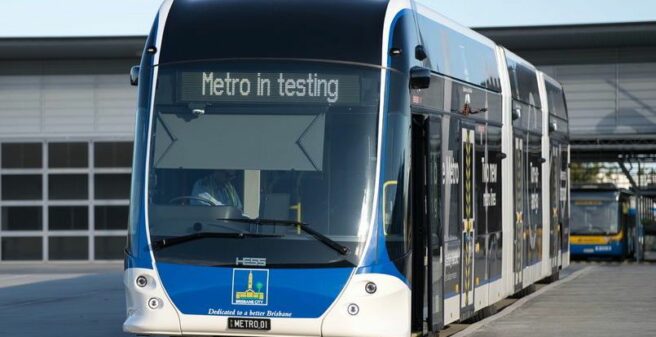 The Hess LighTram pre-series vehicle for Brisbane has convinced the customer: now 60 vehicles have been ordered for the new "Metro Brisbane

The Australian city of Brisbane, capital of the state of Queensland, wants to build a “metro network” in the city’s regular transport system. However, this will not be an underground system, as the name “Metro” might suggest. Rather, it will be a network of electrically operated, almost 25-metre-long double-articulated buses. By the way, there are also “metro bus” lines in Germany, which are certainly of a different kind.

In April, Hess, the electric bus manufacturer from Bellach, Switzerland, delivered a demonstration vehicle of its type “Hess LighTram 25” to Brisbane, where it was tested in regular service with the registration number “Metro 01”. And according to the City Council of Brisbane, it has proved itself splendidly.

That is why an order for 60 of these buses has now been placed with Hess. Hess will not only supply the 24.5 metre long buses, but also the charging infrastructure that will be used to recharge them. Alex Naef, CEO of Hess, comments: “It is a great honour for us to make our contribution to this compelling mass transit system. Our bus is unique in the Australian transport sector: a mode of transport that can carry large numbers of people efficiently, quietly and sustainably, while providing passengers with a pleasant ride.” Naef sees the order as an important confirmation of how attractive the combination of Hess LighTram 25 and rapid charging technology is not only in Europe, but all over the world. And he adds, “This transport system does not rely on rails, but can adapt and therefore be used anywhere. That is why our “LighTram 25″ is the most cost-effective solution for many cities to optimise urban transport and achieve environmental goals. And that is as long as the vehicle lives.”

We reported about the “Brisbane Metro” here:

The demonstration vehicle of the LighTram 25 has been in Brisbane since April. Here it went through an acceptance procedure and could then be approved. Extensive tests “through and through” followed. Its performance, manoeuvrability and speed, its acceleration and braking characteristics, its energy consumption, loading operations, accessibility and generally its driving behaviour were thoroughly scrutinised.

The three-section articulated coach offers disabled passengers three spacious areas in the front section of the coach. There is also an electrically operated wheelchair ramp here. Special “hearing loops” are designed to enable passengers with poor hearing to find their way around acoustically, and special intercoms offer the possibility of contacting the driver. Thus, associations for the disabled were also involved in the development of the bus, and the (future) passengers were also asked to put a bus on wheels that is as user-friendly as possible.

The buses are designed for recharging both on the line and overnight at the depot. The recharging system comes from the Japanese company Hitachi Energy. By the regular start of the Metro system, both the charging stations at the line end points and those at the depot will be completed. The buses can be charged within six minutes. Hess calls this a flash charging system. “Not only is it exceptionally fast,” says Hess, “we also took into account that the batteries have to be light and the buses will be in use a lot.” Alex Naef adds that the point of buses is to charge passengers, not batteries.