Brno: EVO-2 tramway assembling in the company’s own premises 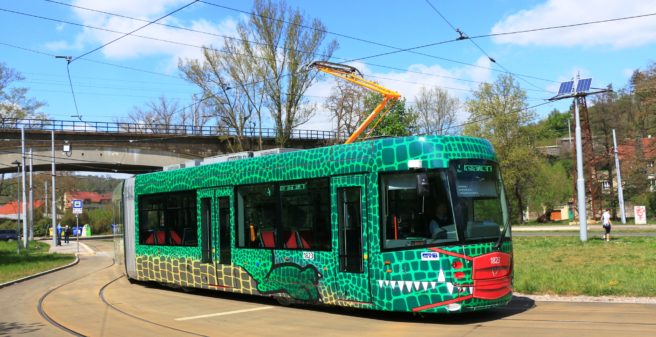 After the delivery of 9 tramways to Plzeň and 3 to Most in 2019/20, the first two vehicles of the current EVO-2 model of the consortium Pragoimex, VKV Praha and Krnovské opravny a strojorny, also referred to as “Allianz TW Team”, have started revenue service in Brno, the second biggest city of the Czech Republic. Unlike Plzen and Most, however, the new low-floor trams for Brno were assembled in the company’s own workshops at Medlánky. The consortium simply supplied the body shells, the bogies and most of the electro-mechanical components. Among other considerations, this production process is also relevant since it generates significant cost advantages.

Two of the up to 41 trams on order (framework agreement) – numbered 1822 and 1823 – are in service today; the entire series is expected to be completed and commissioned in 2024. Five are currently already under construction or undegroing test rides. All will have their home base at the Medlánky depot.

The EVO-2 is 21.75 m long and 2.56 m wide in the current two-section low-floor design layout. It offers 47 seats and 92 standing places. It is derived from the similar Model VarioLF2/2IN, which was previously in production.

Another five EVO-2 trams have been ordered by the Plzeň urban transport authority PMDP, in addition to the nine already mentioned and presented on our website: