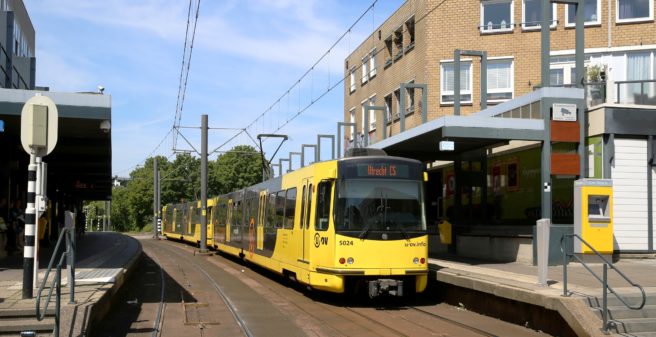 29 May 2020 saw the end of the two outer sections of Utrecht’s light rail lines 60/61 between Nieuwegein Centrum and IJsselstein/Nieuwegein Zuid. Both section have been closed for renovation and conversion to low-floor operation. The high-floor SIG light rail trains will run between Utrecht Centraal and Westraven until 3 July 2020 when the conversion works will begin here, too. The 24 remaining SIG vehicles were all to be scrapped, but a large majority of the representatives in the Provincial Parliament decided to preserve one of the articulated trainsets. However, the train will hardly be able to operate anywhere on the network in Utrecht, due to its width of 2.65 metres and the lack of folding steps to allow access from the new low-floorplatform alignments.

According to the original plans, low-floor operations were to start as early as September 2020. This scenario has been rather optimistic right from the start, and not only because of the Corona crisis, construction will take at least a month longer. This is the official statement from the authorities, but it’s all but unlikely that it may take a little longer. In any case, not all low-floor cars needed for planned operation have yet been delivered – due to the temporary closure of the CAF factory in Spain.

The Utrecht light rail was one of the first to open in Europe in 1983, after the wide-ranging tram-abenadonment policy in most countries since the end of the 2nd World War. At the time of the inauguration, it was considered a real flagship project. After various modernizations of the fleet and the infrastructure over the years, a comprehensive refurbishment programme has been under discussion for some time. As reported (https://www.urban-transport-magazine.com/en/utrecht-uithoflijn-starts-operation/) the two lines 60/61 will be linked to the new Uithof tram line and will be operated entirely with low-floor tramways. CAF supplies 22 seven-module “Urbos” tramways to Utrecht for the new operation.