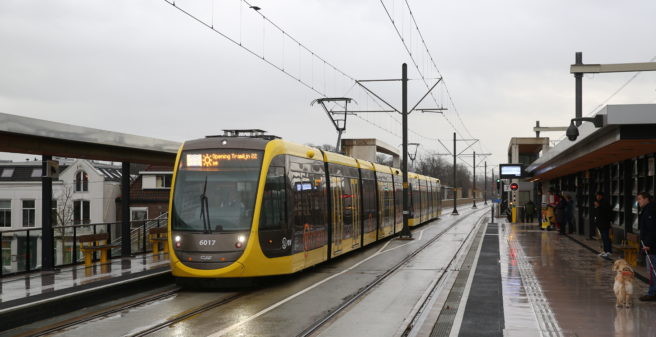 Finally, the time has come: After an official opening ceremony on 14 December 2019, the new Uithoflijn finally started revenue service on 16 December 2019. The new low-floor tramway line is 8 km long and connects Utrecht Centraal station with the university’s medical centre and Utrecht Science Park.

There is a direct connection with the so-called Niewegein lines no. 60/61 at the main station, which serve two branches to Ijsselstein Zuid and Niewegein Zuid, currently as a traditional high-floor light rail service. Lines 60 / 61 will be converted to low-floor operation during 2020.

Originally, the opening of the Uithoflijn no. 22 had been scheduled for 2018, and we had already announced the inauguration for July 2019 – obviously too early, as it turned out:
https://www.urban-transport-magazine.com/en/utrecht-opening-of-the-uithoflijn-several-months-earlier/

The new line 22 now operates every 5 to 6 minutes, but monday to friday only – for the time being. 27 low-floor tramcars of the Urbos model supplied CAF between 2016 and 2018. They are 33 meters long, 2.65m wide, have four double entrances on each side and offer 67 seats as a five-module bi-directional tramcar. For the Niewegein lines, 22 additional seven-module tramways are on order – deliveries to Utrecht have already started. Today the trams normally run in coupled pairs – in the future also as a combination of five-module and seven-module trainsets. A route map of the network can be found at: