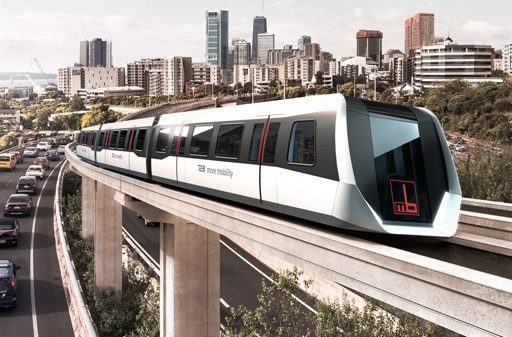 With “Bögl TSB”, the German Max Bögl group of companies, which is firmly anchored in the construction industry, is launching a new type of efficient urban transport system based on a combination of proven technologies. With an annual turnover of around 1.7 billion euros and decades of experience in the construction of railway lines, Max Bögl provides the necessary background for its innovative system.

“Bögl TSB” is a transport system which can be built in urban areas either as an elevated railway, at ground level on its own right of way or in a tunnel as an underground metro. The 12 m long and 2.85 m wide air-conditioned individual vehicles, each with 6 to 12 seats, can carry 127 passengers each at 4 standing places per m2 and can be converted into trains of two to six units and thus up to 762 passengers. Quickly switchable turnouts allow short train headways, and thus an hourly capacity of 40,000 or more passengers can be achieved. Speeds of up to 150 km/h are possible when station distances are long enough. “Bögl TSB” permits small curve radii of up to 45 m, vertical radii of 300 m and gradients of up to 10 %. In elevated railway operation, spans of up to over 72 m between pillars can be achieved. This allows the system to be flexibly integrated into urban landscapes.

The driverless system according to GOA4 is safety assured in such a way that no collisions between vehicles are possible and officially approved. This means that the vehicles do not require heavy and space-consuming equipment for shock absorption. The technology is based on the maglev technology of the Transrapid, but uses long reaction rails and short stator technology on the vehicles. This means that the trains run practically wear-free. Measurements have shown that the trains require slightly less traction energy than the classic wheel-rail technology. At the same time, thanks to the long and extremely precisely designed reaction rails, little noise is generated; the lateral screening of the track elements also reduces noise propagation. Measurements have shown that the permissible noise limits are undercut by at least 15 dBA. Linear motors are used for drive and brake.

In order to implement the turnkey, ready-to-operate overall system, Max Bögl has, according to its own statements, formed partnerships with experienced companies for magnetic levitation and drive technology, train protection and other areas. The standardised system elements of the vehicles and the tracks are manufactured at the Sengenthal plant near Nuremberg, Germany, using highly automated processes. According to Max Bögl, this should result in very low costs of around 30 to 50 million euros per kilometre of double-track line with elevated track.

So far, 125,000 trips or 83,000 km have been made on the factory’s own test track. In Chengdu, China, a 3.5 km demonstration line is currently being built by the partner company Chengdu Xinzhu Road & Bridge Machinery Co. Ltd. “Bögl TSB” is to be marketed by this company in the growth market of China.

Feasibility launched for applications in Germany

According to press reports, the Federal Ministry of Transport in Germany is currently conducting a feasibility study to investigate the applicability of the system for applications in Germany. The study will be completed by Q1/2021 and consists of two parts. The first part deals with the potential of the technology, while the second part will analyse the feasibility of a potential first pilot project for the airport Munich.