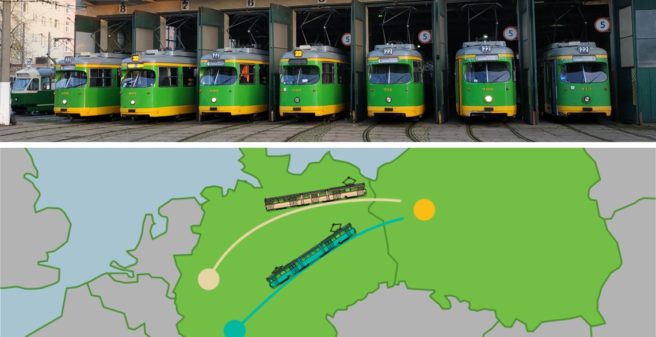 From Germany to Poznań/ Poland and back again - two Düsseldorf GT8 trams are now back in Germany - in Düsseldorf and in the Hanover Tram Museum I © Dirk Pohl, Arbeitsgruppe Helmut 697/ MPK Poznań

23 years ago, the public transport operator MPK Poznań purchased the first second-hand Düwag articulated trams from Rheinbahn Düsseldorf. The existing fleet, especially the articulated Konstal trams of type 102N were in a heavily worn condition and had to be replaced.

The first Düsseldorf vehicles arrived in Poznań at the end of 1996 and entered service in 1997. They were five eight-axle GT8s and one six-axle tram (GT6). Despite being over 37 years old at the time (built between 1957 and 1959), the vehicles were in comparatively good condition. Between 1996 and 2011, a total of 89 vehicles were procured from Düsseldorf and Frankfurt/ Main which became dispensable due to replacement by low-floor trams. Later, MPK also procured uni- and bidirectional vehicles from Frankfurt/Main. Not only in Poznań, but also in other Polish tram cities, the vehicles imported from Germany were nicknamed “Helmuts” – Helmut Kohl, the man who gave his name to the vehicles, finally shaped German-Polish politics until 1998…

In addition to the Düsseldorf and Frankfurt vehicles, MPK also procured a series of eight-axle 1,G, 2G and 3G articulated trams from Amsterdam in the 1990s, which were built by Bejnes between 1959 and 1961.

A year ago, on 10 November 2019, the operation of the classic Düwag GT8 trams ended in Poznań and was duly bid farewell with a grand parade attended by many tram fans and enthousiasts. The last five Frankfurt Type O bidirectional railcars were still occasionally in service in 2020. The entire Düwag fleet has been replaced by new Modertrans low-floor trams. Urban Transport Magazine reported here:

Several “Helmuts” will remain in Poznań in different variants: Three trams are planned as work cars and there is already one historical GT6 (no. 2513 in Rheinbahn livery and logo) and GT8 (no. 702, beige). Both are also operated on the tourist tram line during the summer months. In addition, there are also plans to restore an original GT8 in Poznań’s typical green-yellow livery. During several years, a decommissioned GT8 served as a café with the name “Café Bimba” at the Rondo Starołęka – Bimba is the nickname for the tram in Poznań.

Shortly after the farewell event, tram enthusiasts in Düsseldorf and the Hanover Tram Museum came up with the idea of bringing back to Germany GT8 trams that had been taken out of service (see below).

When the Poznań public transport company “MPK Poznań” took their last ex-Düsseldorf GT8s off the regular service on 10 November 2019 and said goodbye to them in a four-hour tram parade, two Düsseldorf tram enthusiasts had a daring idea. They wanted to bring a GT8 in the green-yellow livery of the MPK Poznań back to Düsseldorf, in order to integrate it into Rheinbahn’s historic tram fleet.

The choice fell on the 697, which was in the best condition of all seven GT8 vehicles still in existence and also had the most interesting life story: The 697 was built in 1964 as a GT6 for the Neuss transport operator. There it was in service as Tw 43 until the Neuss tram was decommissioned in 1971. Afterwards the Rheinbahn Düsseldorf took over the vehicle and re-numbered it to 2623. In 1974 the car was transformed into the GT8, number 2768, by adding a middle section. A further change was made in 1983 with the installation of spring-loaded brakes and the associated renumbering to 2968. After 39 years of service in Düsseldorf, the Rheinbahn took the vehicle out of service in 2010 and sold it to MPK Poznań. There, the car was renumbered 697 and initially continued in Rheinbahn livery. The repainting of this GT8 in the colours of the MPK Poznań did not take place until 2017.

During the preparations for the return, the Corona crisis started and the Rheinbahn was no longer allowed to spend any financial resources on the purchase and transport of the tram. The “Helmut 697” working group, which had grown to four members in the meantime, then launched a collection campaign to raise the financial means for the purchase and transport of the vehicle. Following the purchase of the vehicle, it was to be donated to the Rheinbahn. The success, initially hardly thought possible, came at the beginning of September when the required sum was reached. The TW 697, which had been reserved for the return to Düsseldorf in November 2019, was purchased and the transport by truck was organised. The tram left the Franowo depot in Poznań in the evening of 21/09/2020 to Düsseldorf. Two days later, on 23/09/2020 at 2 a.m., the heavy transporter drove through the entrance portal to the grounds of the Rheinbahn depot Heerdt in Düsseldorf.

MPK Poznań communicated that it was the first second-hand German tram to be brought back to its home in Germany after its deployment in Poland. However, it is already the second time: In 1984 a historic MAN tram car, popularly known as the “Zeppelin”, was restored by the MPK Kraków and transferred to Nuremberg. After its reconstruction it was sold to Nuremberg, where it is used as a museum car. On 10 November 2020, it has be sent to Kraków in order to be the basis for a twin which will be built in Krakóws tram workshop which is specialised on the restoring of museum tram cars.

The HSM was badly hit by a heavy storm in February 2020. Parts of the overhead contact line system were destroyed and torn down. These damages could be repaired quickly, also through donations, and would have been able to offer a complete service again at the beginning of the season. However, the storm claimed another victim, which hit the collection very hard. The Rheinbahn GT6 tram 2304 was irreparably destroyed by a falling tree and catenary pole. In order to be able to continue to present a DÜWAG articulated car of the Rheinbahn Düsseldorf, the HSM has set out to find a replacement vehicle.

A usable six-axle car like the destroyed car 2304 was unfortunately no longer available. In return, the public transport authority of the city of Poznań in Poland offered HSM the 711 car (formerly Düsseldorf 2664) for takeover. Although this is a former Düsseldorf eight-axle car, it is identical to car 2304 in many respects, both visually and technically, and can also be used as a towing vehicle for the still existing Rheinbahn 1699 trailer car. The car from Poznań is definitely a good replacement.

Due to the restrictions imposed by the Corona pandemic and the resulting temporary closure of the museum, the museum was only able to generate a small amount of income to finance the purchase and transport of the vehicle. The HSM was therefore dependent on donations. Thanks to the enormous support of numerous donors, the DÜWAG GT8 711, formerly Düsseldorf 2664, started its journey from Poznań to Wehmingen in September. The contract was signed and handed over in Poznań on 1 September 2020. The GT8 reached the HSM on 25 September.

It is now hoped for both projects that the Corona-related restriction will soon be lifted, so that the “new” historical tram cars can also be presented to the public and tram enthusiasts soon.