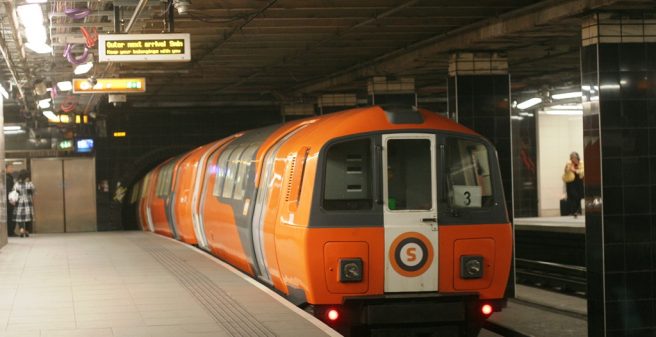 Glasgow is Scotland’s largest city and the third most populous city in the United Kingdom. Several initiatives have now been launched in order to improve public transport in the city: The launch of the Low Emission Zone in 2018 and the modernisation of the Glasgow Subway are just two examples.

With a population of approximately 585,000 inhabitants, Glasgow is a metropolis. Traffic remains an issue. Large highways were built in the 1960’s and 70’s and ss most cities in the UK, Glasgow used to have an extensive tram system which has been dismantled until 1962. Since then, buses, the single subway line and the suburban rail network are making up for the public transport mix. Today, Glasgow’s modal split is 46 percent for private cars and 25 % public transport. 18 % pedestrians and even 9 % rail due to the extensive suburban rail network (see below). The Strathclyde Partnership for Transport (SPT) is the Land Transport Authority which  is responsible for planning and coordinating public and regional transport. It consists in and financed out of the twelve authorities in the Greater Glasgow area including Glasgow City Council. Apart from operating the subway, it has responsibility for local train services, ferries and buses.

The Glasgow Subway is the third-oldest metro system in the world. It started operation in 1896 and is characterised by its very small tunnel profile and its’ 4-feet (1220 mm) gauge. The current fleet dates from 1979 when the system was modernised for the last time. The 33 train cars were built by Metro Cammell at its’ Washwood Heath production site in Birmingham at the time. The trains were equipped with GEC (later Alsthom, then Alstom) traction motors at the time. The exterior design had been developed in close cooperation with the famous Glasgow School of Art. Each car has a length of 12.58 m, a maximum width of 2.34 m and a maximum height of 2.65 m. The loading gauge is that small that relatively tall persons have to bow in order to board the metro. Eight additional cars were added in 1992, making all trains three carriages long. In terms of signalling, a so-called Vital Processor Interlocking was installed in 1996 and later an upgraded Supervisory & Control System was installed.

The Glasgow subway is known for its double-track ring line. It is transporting 40,000 passenger per day. Trains are running every four minutes at peak times and every six-to-eight minutes during off-peak times. A complete circuit takes 24 minutes

No extension in 123 years

For different reasons, the Glasgow Subway system is the only metro system never to have been expanded from its original route in 121 years. In early 2005, the transport authority SPT looked into possible network extensions in the West End, East End, South Side and the Glasgow Harbour areas. The extensions would have used existing unused railway tunnels underneath the city.

In 2007 SPT decided to undertake a major refurbishment of the existing rolling stock and infrastructure at an overall cost of 270 million GBP. The extension of the system would have seen the construction of a new East End Circle, with seven new stations. Unfortunately, the plans were never investigated further and the Glasgow subway remains a circle line until today.

In March 2016, SPT awarded the Ansaldo STS – Stadler consortium to modernise the subway in March 2016. The contracts include the supply of 17 new trains, Communication Based Train Control (CBTC) driverless signalling technology, platform screen doors and depot equipment, and related maintenance support services to upgrade the 10.5 km tracks and 15 stations. The project has a total value of £ 203.2 million. Ansaldo STS’s share is valued at £ 104.3 million. The entire modernisation project is to be completed by 2021. The first new train has been presented in September 2018 at the InnoTrans fair in Berlin and is now being tested in Glasgow. Two further trains are due to be delivered by the end of the summer for the first phase of testing. The vehicles fit all requirements of the Glasgow subway. The 4-car train consist in two long single-cars with two bogies each and two connected semi-trailer cars with one bogie each. Each train has a length of 39.24 m and a width of 2.34 m. The introduction of the new vehicles does not affect the operation of the metro. Auxiliary driver’s cabs are fitted for the transitional phase. The Glasgow project is the first driverless project for Swiss-German firm Stadler.

Glasgow has the largest suburban railway system in the UK outside of London with a total of 57 heavy rail stations within the city boundary. The suburban system is operated by Abellio ScorRail since 2015 to the requirements of SPT. Rolling stock belongs to SPT and used to have a livery of Carmine and cream which is being replaced by the standard ScotRail blue livery since 2012. The main nodal point is Glasgow’s Central station for services going south and Queen Street Station is for links with Edinburgh and the east coast of Scotland and west to and north to the Highlands on the famous West Highland Line. The North Clyde Line, coming from from Helensburgh and Balloch in the west to Edinburgh, also passes through Queen Street Station.

The ScotRail EMU fleet currently consists in the following trains:

Fleet renewal will continue in the upcoming months and years with the last Class 314 trains being replaced in 2019.

Expansion plans for the suburban rail?

There are extension plans for the suburban train system on the table, however no decision has been taken yet. Crossrail Glasgow is a railway project which would connect Glasgow Centraland Queen Street stations. One of the main weaknesses of the Glasgows suburban network is network is the fact that rail services from the South (which terminate at Central main line station) cannot bypass Glasgow city centre and connect to the northern railway network which terminates at Glasgow Queen Street station. Until today, passengers wishing to connect between both networks need to cross the city centre between Central and Queen Street by foot or road.

Scotland’s first Low Emission Zone (LEZ) came into effect in Glasgow city centre on 31 December 2018. Glasgow’s LEZ is being phased in and will only apply to local service buses in the beginning. This is the main reason why First, alongside other bus operators, is investing into new low-emission buses. LEZ will be fully implemented by 31 December 2022. From that point in time, vehicles entering the zone will have to meet specified exhaust emission standards.

Since the deregulation of bus services in the UK in 1986, there are four bus operators of which two, First and McGill’s, are the main operators for the city centre:

Bus operator First Glasgow has reached a milestone after investing over £30m in 150 new Alexander Dennis low emission buses in the last six months, with more investment to come. The buses are fitted with latest Euro 6 engines and equipped with the manufacturer’s low emission SmartPack technology. 96 Enviro400 double deckers have been allocated to four busy urban routes, while ten Enviro400 City double deckers are dedicated to the Glasgow Airport Express. The single deck fleet has also seen significant investment with 44 new Enviro200 buses.

Improving standards for its customers, all of the new buses have comfortable high-backed seats, USB charging sockets and provision for audio-visual next stop announcements. Customers on the Glasgow Airport Express additionally benefit from extra glazing, mood lighting, table seating and wireless phone charging. The new buses are fully compliant with Glasgow’s recently introduced Low Emission Zone and go beyond the mandated Euro 6 minimum by using the SmartPack efficient diesel technology developed by Alexander Dennis. It combines electric cooling fans, engine stop/start and auxiliary load management, which charges the alternator and compressor when the engine is in coast, to bring exhaust emissions down by over 15% against the Euro 6 baseline.

To advance safety, some of the new buses have been fitted with the SmartVision system which replaces traditional mirrors with high-definition digital cameras and displays mounted inside the cab for direct and clear visibility.

With a wider angle covered and automatic adjustment of screen brightness as well as digital image correction to compensator for lighting, shadows and glare, SmartVision not only provides a safety benefit but also reduces the risk of mirror damage or injury to passengers or pedestrians.