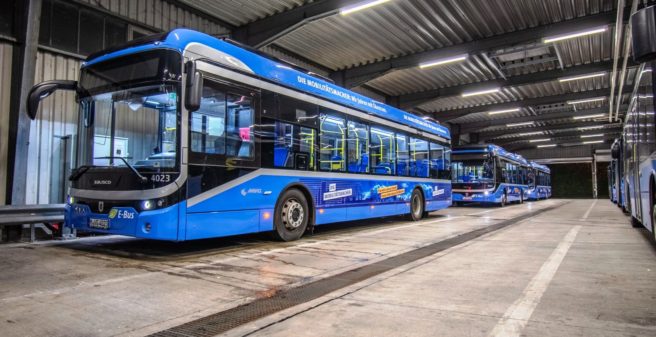 For quite some time already, Munich’s municipal transport operator MVG has been testing and operating electric buses on its network. Right from the beginning, the company relied on buses from the manufacturer Ebusco from Deurne in the Netherlands.

Now another eight Ebusco type 2.2 (numbered 4021 to 4028) start revenue service – this time on line 144 (Rotkreuzplatz – Landshuter Allee – Olympiazentrum – Scheidplatz) which is to be operated only by electric buses. This will help to improve the air quality around Landshuter Allee, which is particularly worse polluted. The other route using electric buses is line 100, but there is still a mix of diesel and electric buses in service as part of the services is provided by articulated buses, and Munich does not have articulated electric buses yet. Ebusco electric buses have been used by Munich’s MVG for some time now. Together with four existing vehicles, the total the number of Ebusco electric buses in Munich is twelve, however, two of the manufacturer’s demonstration vehicles, will now be returning to Deurne. See also our previous report: https://www.urban-transport-magazine.com/en/more-ebusco-in-munich/

MVG CEO Ingo Wortmann announces that the Munich bus fleet will be converted “as completely as possible” to electric buses within the next ten years and that the vehicles will be powered by green electricity. “Two electrified lines are a good start. The prerequisite, however, is that the electric buses are just as efficient and available as today’s diesel buses. This concerns the range and thus the performance of the batteries. And he adds: “It is also important that the capacity of the vehicles is large enough. After all, at some point the cars will have to run on “top lines”, which are very busy. And we can do this without having to use additional vehicles there”.

For the new Ebusco, the charging infrastructure in the east depot has been extended by ten additional charging stations allowing up to 15 electric buses to be “plugged in” at the same time.

Total investment for the eight new Ebusco and the new charging infrastructure is approximately 6 million euros, thereof 3 million funded by the Federal Government and the Regional administration of Bavaria.