No more diesel buses in Madrid by the end of 2022 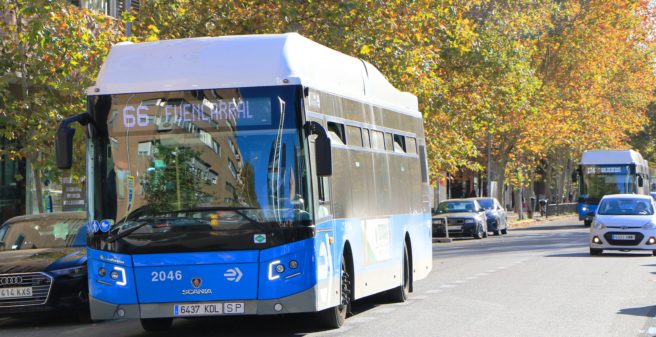 The Empresa Municipal de Transporte (EMT) in Madrid – Europe’s second largest municipal bus operator – will phase out all diesel buses by the end of 2022. Only gas, hybrid or full-electric buses will then operate on all city bus routes in the Spanish capital.

Tenders were published for the purchase of a total of 626 new vehicles to be delivered in the course of the next three years, which will rejuvenate EMT’s fleet of approximately 2,100 vehicles in total. The average age of the buses is already just 5.3 years – significantly less compared to the years 2011-2016, when the operating life cycle of the vehicles was considerably extended from previously 9 years to up to 16 years as a consequence of the severe economic and financial crisis in the country.

520 gas and 106 electric buses will be purchased now. The tender process for the 520 CNG buses has just started and foresees a total budget of € 161.2 million. The first 190 buses (€ 58.9 million) will arrive in 2021, allowing 258 diesel units to be taken out of service and sold or scrapped. In addition, there will be another 100 battery-electric 12-metre-buses for depot charging and six full-electric minibuses. By this means Madrid’s “ZERO fleet” will grow to 179 units by the end of 2021, thus, an electrification rate of 8% of the EMT fleet will be achieved. Total budget for these 296 new buses is € 119.5 million. Of the 100 battery buses, the tender for 50 has already been finalized, with Irizar (20 vehicles) and BYD (30) sharing the contract, as in case of the previous delivery of ebuses in 2019/20. For the additional 50 battery buses, the tender process has just begun, for the 6 minibuses it is about to be concluded.

In order to further strengthen bus transport network in Madrid, 45 kilometres of additional, separate bus lanes are to be constructed according to the city government’s specifications.