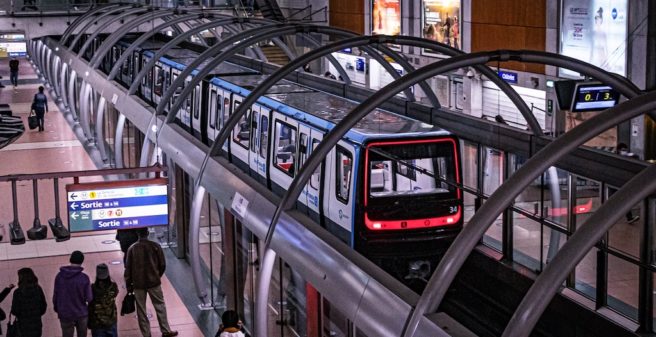 Opened in 1998 and fully automated from the start, Line 14 with rubber-tyred vehicles is designed for much higher transport performance than the historic Paris metro lines. All stations, first between Madeleine and Bibliothèque François Mitterand, with intermediate extensions north to Saint-Lazare railway station and south to Olympiades, are designed for 8-car trains with around 1000 people capacity. At first, however, the line was operated with 6-car trains. While the station spacing of the other metro lines is on average only 550 m, which does not allow a higher cruising speed than about 30 km/h, line 14 has spacings of about 1300 m and thus reaches a speed of about 40 km/h.

For more than 20 years, line 13 of the Paris Metro, which is currently still the longest and most congested, has been hopelessly overloaded on the northern branch towards Saint-Denis Université. During rush hours, staff were temporarily deployed at Saint-Lazare station to ensure that the doors of the trains could be closed at all when there were large crowds. Since 2017, the rush hour train headway has been reduced from the original 140 seconds to 90 seconds, giving a theoretical hourly capacity of over 30 000 PPHD for the approximately 800 places on a 6-car train. From 2010, the busiest stations were equipped with platform screen doors. But this was not enough.

By extending line 14, which previously terminated at Saint Lazare station, to Mairie de Saint-Ouen on 14 December 2020 with four new stations, capacity will thus be more than doubled on this connection. Thanks to the extension of line 14, the number of passengers on the northern branch of line 13 should decrease by 25 %. This 1.5 billion euro extension of line 14 by 5.9 km was now inaugurated on 14 December.

Some stations are up to 26 metres underground, compared to 10 to 15 metres in the historic network. With a dense train sequence of only 85 seconds, the line can carry up to about 40 000 people per hour and direction with 8-car trains at peak times. A first order of modern 8-car class MP 14 trains from Alstom are in delivery. They have an all-electric braking system with recuperation, which reduces the fine dust produced by mechanical brakes and lowers overall energy consumption by up to 17 % compared to the previous MP05 vehicles. The vehicles are also 2 dB quieter and 95 % recyclable. The interior is modular and can therefore be adapted later.

Line 14 will be extended again for the 2024 Olympic Games at the latest. In the north, to the future Saint-Denis-Pleyel station, in the south, to Orly Airport. The tunnel boring machines are in full action. This will be the first building block of the future Metro Grand Paris Express with connections to the planned lines 15, 16, 17 and 18. Line 14 will then be the longest in the conurbation with 27 kilometres and undoubtedly the most used. Its ridership is expected to increase from 550 000 to 1 million trips per day.

We have published a detailed report on the expansion of the Paris metro network here: