“Rolling Stock in the Railway System” 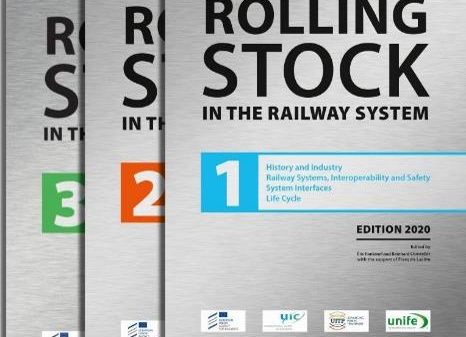 A technical book in three volumes intended for industry professionals as well as railway enthusiasts.

The work was written by engineers from several major European companies and of seven different nationalities. It takes stock of the modern techniques applied to rolling stock, while placing it within a rapidly evolving railway system, following the opening of the European borders.

The first volume of the three volume work acquaints the reader with the railway world and railway rolling stock by a historical approach (chapter 1), followed by a description of the railway system (chapter 2), and an analysis of the management of the system by reference to the European directives for interoperability and safety (chapter 3). This later chapter has been deeply amended as compared to the first version published in French, to take into account the putting in force of the so-called “fourth legislative railway package” by the European Union. The work continues with a technical analysis of three key interfaces between rolling stock and infrastructure (chapter 4) and then by a presentation on the mastery of the life cycle of a railway vehicle (chapter 5).

The second volume describes in its first chapter (chapter 6) the technical characteristics and architectures of trains, depending on the transport service delivered (tramways, metros, suburban, regional, intercity and high speed, freight), a specific section being dedicated to industrial design. The following chapter 7 is dedicated to on-board “mechanical” sub-systems (comfort and related internal arrangements, structures, guiding systems and coupling), specific sections being dedicated to passive safety.

The third volume deals with all systems that control the operations of the train. A first chapter (chapter 8) is dedicated to traction systems (electric traction and thermal traction), and a second one (chapter 9) to braking systems and air production, then chapter 10 deals with train control and monitoring. Another chapter is dedicated to all systems when embedded in locomotives (chapter 11) and chapter 12 describes the driver’s environment. At the end, chapter 13 gives some hints on what might be the technical features of rolling stock in the near future.

“These 3 volumes are an excellent synthesis of the knowledge acquired in the field of rail transport. They allow us to better understand the great diversity and the high level of technicality of the rail transport system. They have the merit of presenting this complex system in a didactic and attractive way, without being simplifying, and they are suitable for both new and experienced engineers. Exciting reading!”

“This book is a symbol of a new era of the European railways, resulting from more than twenty years of experts’ collaboration in the working parties of the European standardisation bodies and of the European Rail Agency. It can be considered as the first European book of its kind and I wish it the largest possible success for the education of the next generation of European railway engineers – building upon the fundament of a deep understanding of the history, but oriented towards the future, solidly embedding all concepts from the unique framework of European standardisation.”

“This book on modern rolling stock, written by engineers from all around Europe who have, for most of them, worked together on European research or standardization projects, was long overdue. This technical compendium will be for the years to come a common reference for all entities interested in research and innovation in rolling stock, breaking from current technologies and concepts to prepare together the European rail system of tomorrow.”

“The English edition of this book was awaited for long and we are very happy at UIC to see it finally released. What makes this book unique is that it knows how to balance technological articles of high expertise with historical and descriptive articles on railways vehicles and trains, allowing neophytes to understand how these fit into the multiple variants of rail transport systems. The analysis of the European system and its regulations also fills a considerable void in the existing literature. We are happy and proud to see that many experts from the European members of UIC have contributed to it and we have no doubt that it will quickly become a reference for all, designers and maintainers of rolling stock, operators or simple lovers of the railway transportation.”

UTM published an extract from the compendium here: