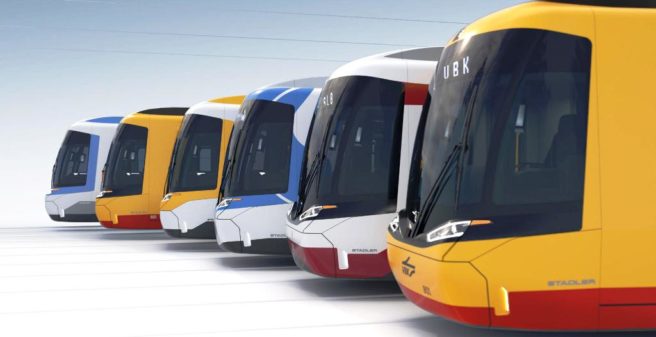 With the clear aim to raise synergies, six German and Austrian public transport companies joined forces some time ago to develop a concept for a joint tender for tram-train trains. We reported about the tender already here: https://www.urban-transport-magazine.com/en/new-tram-trains-six-operators-start-joint-vehicle-tender/ . It has now been completed: Stadler has been awarded the largest contract in the company’s history with a total volume of up to four billion euros. It has won an international tender for up to 504 vehicles as part of the “VDV Tram-Train” project. In addition to vehicle production, the framework agreement also includes a maintenance contract lasting up to 32 years. Part of the framework agreement is a fixed order quantity of 246 CITYLINK vehicles representing a volume of around 1.7 billion euros. There is also an option to order up to 258 more vehicles.

The award of the contract marks the beginning of a long-standing partnership between Stadler and the project consortium, consisting of Verkehrsbetriebe Karlsruhe (VBK), Albtal-Verkehrs-Gesellschaft (AVG), Saarbahn Netz, Schiene Oberösterreich, the State of Salzburg and Zweckverband Regional-Stadtbahn Neckar-Alb. Over the next ten years, Stadler will produce 246 CITYLINK vehicles for the six operators. A total of 28 vehicles have been firmly ordered for Saarbrücken, another 73 for VBK Karlsruhe, 75 for AVG, 30 for Neckar-Alb and 20 each for Salzburg and Oberösterreich (Upper Austria).

The first four vehicles will be delivered to Saarbahn as pre-series vehicles as early as 2024 according to the delivery schedule. There they will be tested by the cooperation. The Saarbahn will then receive a total of 24 more tram-trains from 2025 (option for a further 21), which will replace trams from the existing fleet.

Also in 2026, Schiene Oberösterreich will receive the first of a total of 20 tram-trains, which are initially intended to replace and reinforce the existing fleet on Upper Austrian local railways. The option for a further 50 tram-trains applies to the Linz city regional railway system currently in the planning stage, where the first tram-trains are to be used from the end of the 2020s. A total of 20 (option for another 5) trams will go to Salzburg from 2026, replacing older-design vehicles.

All vehicles will be supplied in a three-part design. The length of the vehicles, the number of doors, the boarding and coupling height as well as the configuration of the CITYLINK versions will vary depending on the delivery location and the customer. All the vehicles will have certain features in common: they will be fitted with an HVAC system for the passenger compartments and driver’s cab, and have spacious multi-purpose areas with two wheelchair spaces that can be flexibly configured. The tram-trains will be individually equipped to suit the place of use. For example, the vehicles for the Albtal-Verkehrs-Gesellschaft will have a toilet as well as facilities for cycle racks, while Schiene Oberösterreich has opted for luggage racks as an extra feature.

Providing one type of vehicle for six operators is unusual. “On the project team, we spent hours developing a common set of specifications. We defined a standard with up to five further versions to meet the operator-specific requirements such as boarding height, coating and place of use,” explains the overall project manager Thorsten Erlenkötter from Verkehrsbetriebe Karlsruhe.

Verkehrsbetriebe Karlsruhe is in charge of the overall project management and, following the tendering phase, is now also coordinating the implementation of the project. “We are very happy that in Stadler, we have found a reliable and experienced manufacturer for this extraordinary project. A procurement concept like the one we have implemented here is unique worldwide to date. The six operators are united by their belief in the concept of tram-trains that can link large cities with their respective regions according to the Karlsruhe model and that can bring people directly into the centre quickly without having to change trains,” says Christian Höglmeier, technical managing director of Verkehrsbetriebe Karlsruhe.

(Info provided by: Stadler, Rail, KVV, among others)