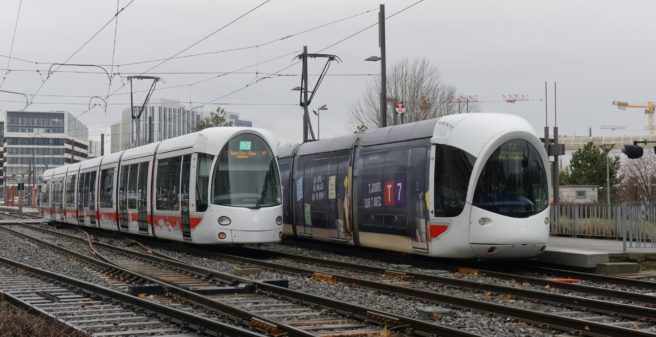 Two Citadis 402 - two designs: On the occasion of the inauguration of the new tram line T7, the railcars 857 (right) in the old and 906 (left) in the new design meet at the terminus in La Soie I © Yvon Brument

With the new line, a total of 8 tram lines including the Rhônexpress express tramway to Saint Exupéry Airport are operated on the 73 km network. The added line length is 91.6 km. It carries about 95 million passengers per year (before Corona) (about 260,000 passengers per day on average). In addition to the seven tram lines, the public transport operator TCL (Transports en Commun Lyonnais) operates four metro lines (one of which is fully automated driverless operation and one of which is a rack railway), two funicular lines, 120 bus lines, nine trolleybus lines, four night bus lines and five on-demand lines. In the whole of 2018, 480.2 million passengers were recorded on the TCL network. This represents an average of approximately 1.3 million passengers per day. Lyon is home to 516,000 people. There are 2.3 million inhabitants in the Greater Lyon area. Translated with www.DeepL.com/Translator (free version)

The new line connects « Vaulx-en-Velin La Soie » to « Décines OL Vallée » in 10 minutes, offering a fast and efficient daily service to the health, sports and leisure centres in the booming neighbourhood around the Groupama Stadium. This project, with a budget of 1.6 million, is also part of an intermodality optimisation thanks to its connection to the multimodal exchange point in Vaulx-en-Velin La Soie where passengers can interchange to line A metro, the T3 tramway, and almost 20 bus lines, Rhônexpress (express tram to Saint-Exupéry airport) and a park-and-ride facility with 474 spaces for cars and 142 for bicycles. No new tram alignment has been laid for line T7, but only additional tram tracks and platforms for its terminus in La Soie. Using part of the T3 infrastructure (inaugurated itself in December 2006), T7 serves the “Décines Centre” and “Décines Grand Large” intermediate stations and the branch to the Olympic Park, inaugurated in 2015. The new line T7 thus offers nearly 25% more capacity to all the passengers of line T3 on this common section.

In addition, in order to support the high number of passengers on the T3 tramway line, which is used every day by more than 52,000 passengers (in 2019), 2 new high-capacity trams have been introduced to operate on the line. Acquired as part of the tramway capacity project, these two 43m long Citadis 402 trams accommodate up to 300 passengers allow for an additional frequency of 4 minutes during the rush hour between “Vaulx-en-Velin La Soie” and “Décines Grand Large”.

Further information on Lyon’s public transport can be found here: