Testing the highest tramway in the world: Delingha 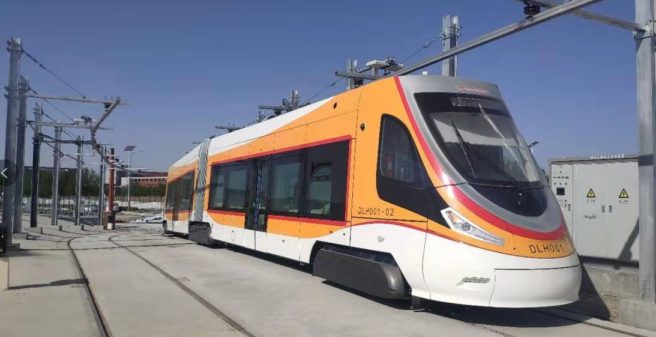 Last week we reported on the new tramway in Cuenca/Ecuador as one of the highest tramway systems in the world. (see: https://www.urban-transport-magazine.com/en/opening-under-covid-restrictions-tranvia-cuenca-in-ecuador/)  However, the actual „winner“ of such a kind of competition soon will be the city of Delingha, the capital of Haixi Mongol and Tibetan Autonomous Prefecture in Qinghai province, located nearly 3,000 metres above sea level. Test runs have started over part of the 14.4 km long lines T1 and T2 which will start at the main railway station and serve the inner city and some residential areas by 19 stops. Construction work had started already in 2017, and the tramway will launch revenue service after a test period of some 3 months, most likely later this year.

CRRC Qingdao Sifang Co., Ltd. has supplied the first of a series of 25 two-section low-floor tramcars with a total lenght of 24.8m. They can accommodate up to 170 passengers. All vehicles are equipped with a combined lithium-titanate battery storage and supercapacitors system for entirely catenary-free operation over the full length of the lines. For charging short stretches of rigid-catenay are installed at stops along the route. This kind of fixed overhead is also installed at the depot area, in order to facilitate movements of the vehicles inside the area. Specific materials have been used for the construction of the vehicles and also for part of the fixed infrastructure, to allow the operation of the new tramway under extrem climate conditions at the Qinghai-Tibet Plateau, with very low temparatures, oxygen deficit, dry air, little rain and harsh wind, in particular the electrical and energy storage equipment.

More lines are planned to be built in future, and a prolongation of the two-module vehicles is also considered as an option for the future once passenger demand requires additional capacity.