The end of trolleybus trailer operation 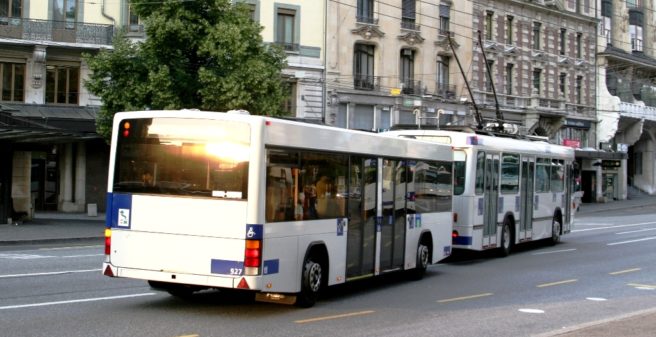 In Central Europe, especially in the German-speaking countries, passenger trailers behind buses were widely used for many decades. Due to the comparatively low performance of combustion engines until the 1960s, the use of such trailers behind trolleybuses was a good combination, both from a technical and from an economic point of view. In recent decades however, more powerful diesel buses became available as well as articulated buses as an alternative, and changes of legislation made the use of trailers more difficult in many countries. Thus, most public transport companies lost interest and phased out trailer operation. A minor revival only occurred during the last 15 years, mainly in Germany.

Among the trolleybus operators, a few Swiss cities kept passenger trailers in their fleets beyond the 1980s. TL Transports publics de la région lausannoise SA in Lausanne is particularly noteworthy with more than 50 trailers still in service just 15 years ago. In recent years, however, they have been gradually replaced by articulated or even double-articulated trolleybuses in Lausanne.

Operation of the last passenger trailers behind trolleybuses now came to an end – 70 years after this mode of operation was introduced in Lausanne: On May 4, 2021, two coupled sets operated on line 7 for the last time – not only in Lausanne, but also worldwide.

TL used only low-floor trailers since 2013 and the fleet consisted in a total of 31 such low-floor trailers purchased between 1987 and 2007 (numbered 981, 901-930). At the beginning of 2021, a total of 12 trolleybus+trailer sets were still in service: Trailers 907, 912 (built in 1990) and 921-930 (built in 2006-7) coupled with high-floor NAW/Hess trolleybuses 754, 766, 772, 774-780, 782, 789, and 791 (built in 1987-89). The ongoing delivery of Hess articulated and double-articulated LighTram19 and LighTram25 trolleybuses now brought trailer operation to an end. We had reported about the new vehicles here: https://www.urban-transport-magazine.com/en/lausanne-starts-double-articulated-trolleybus-operation/ . From now on, only low-floor buses are in service in Lausanne. The remaining two-axle trolleybuses are sold to Ruse in Bulgaria. Siegen/Germany-based Wern Group, which had already taken over trailers from Lucerne a few years ago, will take over most of the trailers. They will operate behind MAN diesel buses.

Lausanne was the last trolleybus operator in the world that still used trailers in regular passenger service, after Lucerne’s last examples had been taken out of service in 2017. However, several of them could be sold to diesel bus operators, and others will survive in museums or as works cars. In addition, Verkehrsbetriebe der Stadt St. Gallen is a trolleybus operator and owns five passenger trailers fleet, but these are only used behind diesel buses, as the trolleybus fleet exclusively consists of articulated vehicles.

Passenger trailers behind motor buses are still in use in various other regions and countries, especially in Germany, with the Munich region being the largest single spot being with almost 100 vehicles in regular service.

Why is there no trolly buses in the u.k. In Brasov Romania thay have just ordered 25 more new ones .after having 20 delivered last year .