The modernisation of the Schönbuchbahn 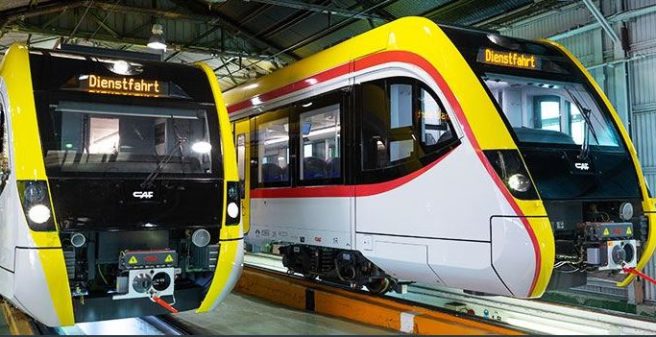 The 17 km long Schönbuchbahn runs from the large district town of Böblingen, which is about 30 km from the German metropolis Stuttgart, in a south-easterly direction to Dettenhausen. It branches off the main line Stuttgart – Horb – Singen – Zurich and is connected to the S1/S11 and S60 lines of the Stuttgart S-Bahn. It is operated by Württembergische Eisenbahngesellschaft (WEG), the railway infrastructure company is Zweckverband Schönbuchbahn (ZVS). The line is part of the Stuttgart Transport and Tariff Association (VVS).

The line climbs fairly continuously from Böblingen to Weil im Schönbuch. The last 4 km or so to Dettenhausen have an average gradient of 17 ‰. The numerous tight curves with radii around 300 m, which previously did not allow speeds above 80 km/h, account for about 17 % of the line length. Nevertheless, with 12 stops and an average stop spacing of 1.4 km, the railway achieves a cruising speed of 44.3 km/h with a journey time of 22 minutes.

The line was put into operation in 1911. In the mid-1960s, passenger traffic was abandoned and in 1988 the German Federal Railway (Deutsche Bundesbahn) wanted to shut down the line for freight traffic as well. After citizen protests against the closure of the line, Württembergische Eisenbahngesellschaft (WEG) drew up a concept for the reactivation of the railway in 1989 on behalf of the district of Böblingen. In 1993, the authorities founded the ZVS, which took over the railway facilities, and in 1994 they commissioned WEG, now a subsidiary of the French Transdev Group S.A., to operate the line from December 1996.

Subsequently, the line was upgraded over several years. The maximum speed was increased from 50 km/h back to 80 km/h, new stops and stations were built and adapted, rails were replaced and a train crossing facility was created, level crossings were secured, removed or replaced by an underpass, bridges were refurbished or newly built, operational control radio and ticket machines were introduced, a new depot was built and later extended. Four diesel railcars were procured. After 2007, the signalling was improved, making technically secured train control operation possible.

Whereas the bus service that existed before the renovation of the railway, only carried 2,000 passengers a day, ridership increased rapidly with the new railway service: in 1996, there were twice as many, namely 4,090 passengers, and in 2015 there were already 8,200, an average annual increase of around 4 %. On weekdays, the number of passengers often exceeded 10,000. Therefore, it was decided in 2015 to electrify the line with 15 kV 16.7 Hz. Electric operation is emission-free compared to diesel operation with the appropriate energy generation. Thanks in particular to the energy recovery of the braking energy into the network, it leads to a reduction in energy consumption and reduces noise pollution for passengers and residents. A 15-minute interval was introduced between Böblingen and Holzgerlingen, which required double-tracking the sections Böblingen – Böblingen Danziger Straße as well as Böblingen Zimmerschlag – Holzgerlingen Hülben. On the remaining section to Dettenhausen, the 30-minute frequency remains. Sections of the line were equipped for 100 km/h and all the signalling systems were renewed. Stops were removed and others newly built. All platforms were brought to a uniform length of 85 metres and a height of 76 cm. In Böblingen, the intersection with a busy road was replaced by a road underpass and in Holzgerlingen another one by a railway underpass.

While the line had already been electrified and the construction work completed in December 2019, the delivery and acceptance of the 12 new electric railcars ordered from the Spanish manufacturer CAF is currently still in progress.

In the meantime, four Class 426 electric railcars leased from Deutsche Bahn are running in mixed operation with the existing diesel railcars. For the new vehicles, the ZVS attaches importance to obtaining lightweight vehicles with low axle loads for the winding route in order to achieve low energy costs for the traction and low maintenance costs for the tracks as well. A first tender in 2013 did not yield satisfactory results. The ZVS was disillusioned to discover that in the last 15 years regional railcars have become heavier and heavier while they offer fewer and fewer seats, mainly due to increasingly restrictive European regulations, the inflexible “platform” concepts of the manufacturers and the ever increasing demands of passengers for comfort. Correspondingly, the energy demand and the load on the infrastructure are increasing. The evaluation of indicative offers showed considerable deviations from the expected values, especially in the following points [1] :

The comparison of the offered trains showed an increase of 40 to 50 % for the empty weight of the train, depending on the offer, while the specific seat weight (empty weight/seat) approximately doubled.

The order could only be placed in 2017 after a second tender. Three-car articulated multiple units built according to the LNT guideline from CAF’s “Nexio” platform are used, whose technical data can be seen in the table. Although these vehicles are not very light, the fact that they have four bogies instead of the usual three for such a vehicle length should result in low axle loads and, together with the relatively short bogie axle base, in low wear on wheels and rails and thus low maintenance costs. At peak times, the rather small door ratio will probably lead to long passenger changing times, especially when wheelchairs have to be brought into the vehicle via the wide space between the vehicle and the platform. By April 2021, 5 vehicles had been delivered, 3 of which are being used for test and approval runs. A further 4 vehicles are to be delivered by the end of 2021, followed by the additional 3 vehicles ordered as options. CAF will also take over the maintenance of the trains over 19 years, which will be carried out in the new three-track train workshop built by the ZVS in Böblingen.

Main technical data of the electric railcars of the Schönbuchbahn:

The expansion and electrification that has been continuously promoted for many years, the improved frequency and the expectation of the new larger vehicles, have probably contributed to the fact that new building areas have been created or are in the process of being created in the neighbouring communities of Weil im Schönbuch and Holzgerlingen and that the joint Sol industrial estate and the Weil-West industrial estate have been expanded. Further improvements in services have been discussed for some time, but have so far failed due to lack of funding. ZVB is therefore in negotiations with the state of Baden-Württemberg. An extension of the 15-minute interval during rush hours between Holzgerlingen and Weil im Schönbuch is being considered and will be investigated. Direct trains to the Stuttgart metropolis are not on the agenda.