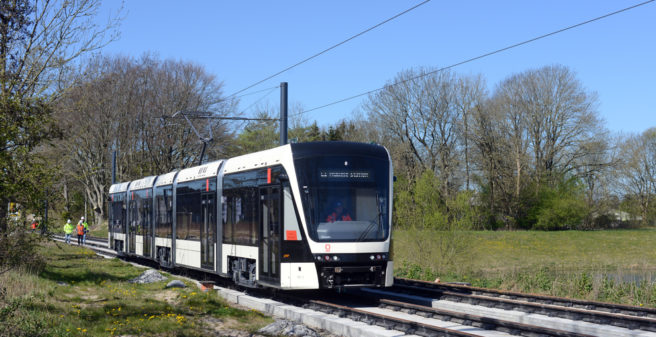 For decades, there was no operating tram system in Denmark at all. This has changed since the year 2019: The return of the tram has been picking up speed in several cities: after the delayed step-wide opening of the light rail in Aarhus in several steps between 2017 and 2019, a tangential line is currently under construction in the capital Copenhagen. UTM reported here:

Now the test drives on the first section of the new light rail (Letbane) in Odense on the island of Funen have started. The inauguration is scheduled for next year.

On April 21 2020, the test drives began on the route along the Hestehaven between Svendborgvej and Munkebjergvej. In the coming months, the tests will be gradually expanded to the southern part of the future line between the station Hjallese and Nyborgvej. And finally, the test runs will be extended to the entire light rail line to the Tarup Center by 2021. The aim is to start operating passenger services in autumn 2021.

The standard-gauge Odense light rail will have a length of 14.5 km with dual tracks. It crosses the urban area from the northwest to the south, serving important administrative, training and sports facilities as well as shopping areas. In future, a 7.5-minute frequency will be offered during the day in daytime traffic, and a 15-minute frequency during the off-peak hours. The fleet will consist in 16 Variobahn low-floor trams, built and supplied by Stadler Pankow GmbH. The project has a total cost of over 3 billion Danish Kroner (approx. 400 million Euros), which is financed by the city of Odense, the Danish government and the region of southern Denmark. A second 7.8 km line is planned.

The former, small tram in Odense had already ceased operation in 1952 after only 41 years of operation. From 1939 to 1959, there used to be a trolleybus line in the city.

All photos by John Hansen – additional photos can be found on the Railorama website: https://www.railorama.dk/fotos/danmark/sporvogne-letbanerdk/odense-letbane/