The West Midlands Metro – Part 2: The current route from Birmingham to Wolverhampton 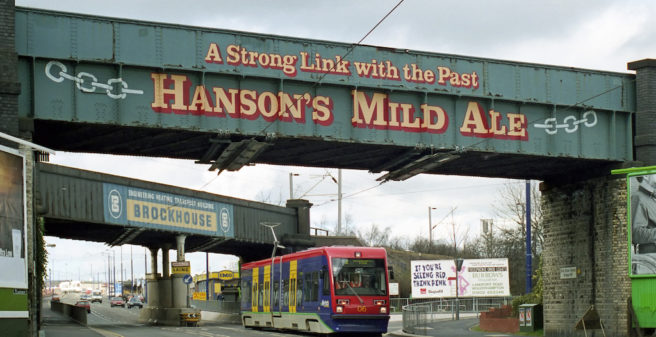 The temporary terminus at Birmingham Library has two platforms with crossovers allowing each to be used alternately. The tram departs on battery power through the Paradise Circus redevelopment site to the stop in the shadow of Birmingham’s impressive Town Hall, recently restored after many years out of use. En route, tickets and passes are checked or sold by an on-board team member, a role introduced following significant issues with the at-stop ticket machines installed initially. A steeply graded descent with tight curves follows to the Grand Central stop where the pantograph will normally be raised for the rest of the journey. Similar curves and gradients mark the route from here on street through stops in Corporation Street and Bull Street to reach the grass track reservation alongside Snow Hill station and the new stop at St Chads for the city’s RC cathedral. On leaving here the tram joins the former railway formation, originally opened in 1854 as a dual gauge (broad and standard) continuation of Brunel’s main line from London.

The rail section features 20 stops including two interchanges with heavy rail services at Jewellery Quarter and the Hawthorns. Between these is the Queen’s Head viaduct taking the Metro over a freight access line, the single most expensive structure on the initial route. A series of stops serves the centre of West Bromwich, Lodge Road being the most distinctive with a lift tower providing access to the platforms in a deep cutting. There is a traffic-light controlled level crossing on the approach to Black Lake stop which is followed by Hill Top tunnel. The longest section without intermediate stops then leads to Wednesbury Great Western Street stop. This is alongside the depot although the depot access track joins the route at the next stop, Wednesbury Parkway which has a third platform face for trams entering or leaving service. Bilston Central stop is in a deep narrow cutting requiring lifts to staggered and curved platforms but is very convenient for the town centre and bus station.

After the Priestfield stop, the tram joins Wolverhampton’s Bilston Road, initially running in the carriageway before moving on to a central reservation at the only on-street stop, The Royal. This was intended to serve Wolverhampton’s Royal Hospital which however relocated shortly before the Metro opened and local redevelopment is still awaited.

The final notable structure is the iconic wishbone bridge that carries Metro across the well of a traffic island on Wolverhampton’s inner ring road, the actual carriageway crossings are traffic signal controlled. Immediately before the now single-track Wolverhampton St Georges terminus is the junction for the as yet unopened extension to Wolverhampton heavy rail station.