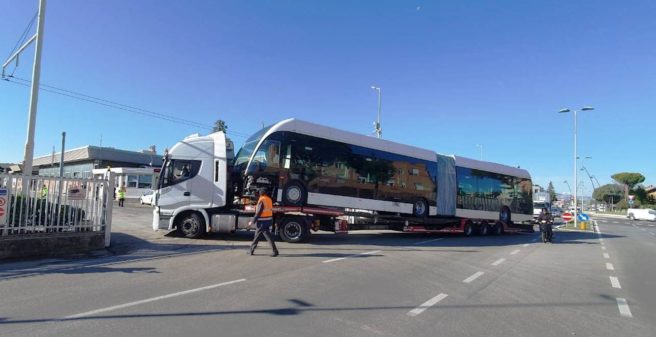 Summer, sun and beaches… that’s what most people have in mind when they hear about Rimini. The well-known seaside resort at the Italian Adriatic coast and its neighbouring towns have a serious traffic demand, and when it comes to public transportation there is now a new offer for tourists and local residents:

In the afternoon of 12 June, the first of nine brandnew ExquiCity 18 trolleybuses ordered for the new bus system “Metromare” arrived from the Belgian manufacturer Van Hool. Eight more of these vehicles are expected to follow in the next two months. The 18.6m long ExquiCity articulated trolleybuses  are already in service with some other operators for some time, including e.g. recent deliveries to Montreux. ( https://www.urban-transport-magazine.com/en/a-new-generation-of-trolleybuses-in-montreux/). The electrical equipment was supplied by Kiepe Electric.

On the shores of the Adriatic Sea, the new buses will be used on the 10 km long express line to THE BRT (Bus Rapid Transit) standard between Rimini and Riccione, which was initially opened on 23 November 2019 with second-hand diesel buses on loan. The line uses its own right of way newly built on purpose along a railway line and is completely fenced-in, with the exception of the final loop at Riccione station – this should allow very fast rides along the route. A total journey time of only 23 minutes is planned, including 15 intermediate stops.

Metromare has been under construction since 2011 already and most the infrastructure was completed in the course of 2018. The total investment amount is approximately EUR 92 million for both, the infrastructure as well as the vehicles. Operator of the service is START Romagna SpA, while PMR = Patrimonio Mobilita Provinca di Rimini is responsible for the infrastructure.

Parallel to the new line with a distance of some 150 to 700 meters, the traditional trolleybus line 11 is running between Rimini and Riccione since July 1939, however it serves much more stops on its 12.8 km route and has no own right of way which results in a significantly longer journey time. Contrary to initial plans, this trolleybus line will be maintained. Six Van Hool/Vossloh-Kiepe articulated trolleybuses of the AG300T model, built in 2009/2012, provide the services. They replaced the last of the 17 Volvo Mauri B59 Ansaldo built new in 1977. Previously, trolleybuses of the types FIAT 635F and 656F CGE and FIAT 2411 Cansa and Menarini CGE were part of the fleet roster.