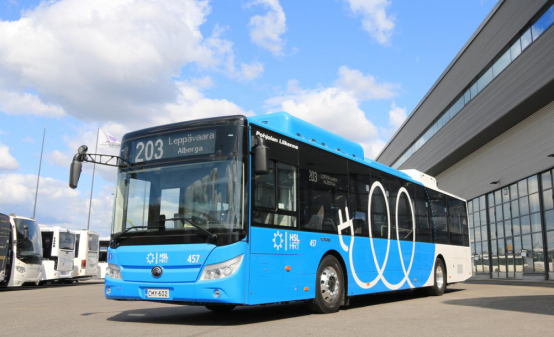 The semi-public bus company “Pohjolan Liikenne Oy” uses 35 Yutong E-buses of the E12 (ZK6128BEVG) model on several lines in the metropolitan area of Helsinki: 23 of them use the bus feeder ssystem at Leppävaara suburban- and long-distance train station on the Helsinki-Turku railway line. Leppävaara is one of the center locations (out of four) of the city Espoo, a city some 20 km west of Helsinki. With 290,000 inhabitants, this modern city is the second largest in Finland. The other 10 Yutong e-buses operate around the city of Kerava (37,000 Ew.), approximately 30 km north of Helsinki. The public authority is called HSL (Helsingin seudun liikenne, Transport Region Helsinki), which coordinates all bus services throughout the region.

According to the manufacturer, a full battery charge of the E12 is sufficient for a range of 230-300 km under normal conditions of urban traffic. Pohjolan Liikenne O confirms these numbers. The buses draw their electricity from large-capacity lithium iron phosphate batteries with 375 kWh. They are powered by permanent magnet synchronous electric engines with a nominal power/torque of 120 kW / 1400Nm and a maximum power/torque of 240 kW / 2850Nm. Parts of the body work of the buses are made of fiberglass which is supplied by the Finnish manufacturer “Excel Composites” in order to significantly reduce the bus weight and thus to lower the energy consumption.

Pohjolan Liikenne is very satisfied with the performance of the Yutong e-buses; they run smoothly and quietly and appear to be reliable even in harsh winter conditions. Pohjolan Liikenne is currently purchasing Volvo 8900 (Euro 6) diesel buses, which should allow for a direct comparison of both concepts. The operator has also taken delivery of 5 VDL Citea SLE-129 electric buses.

The author has just published a report on ebuses in Finland in the German magazine “stadtverkehr”  no. 6/2020. In addition, we reported about Linkker ebuses in Helsinki here: